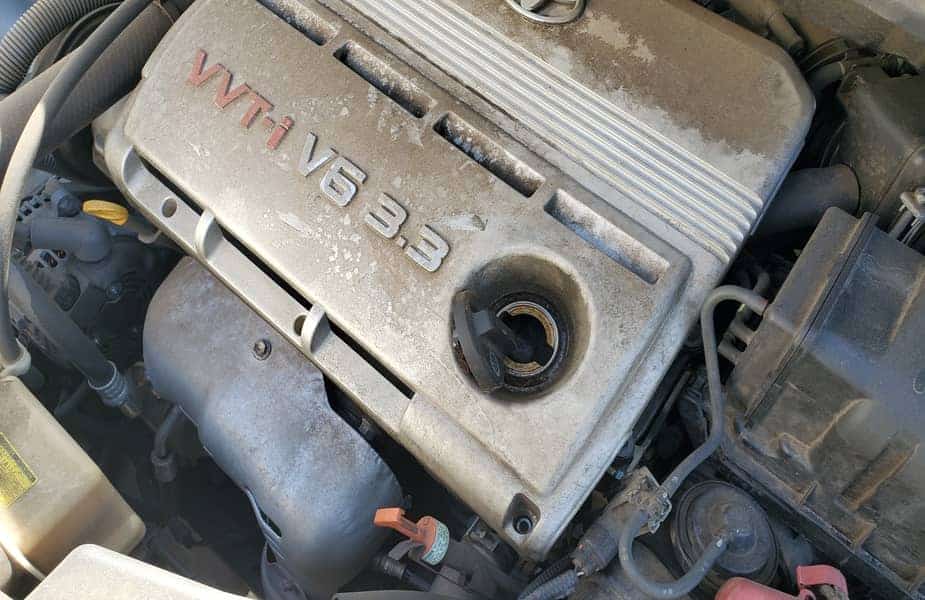 There’s no doubt no one wants their car to run out of oil. But what would you do if it happened to you?

If your car runs out of oil, you should stop driving and call a tow truck to take your car to a mechanic. If you don’t, you can destroy your engine, as you may have an engine oil leak, bad PCV valve, failed piston rings, or a blown head gasket.

Below you will find different symptoms that indicate your car is low on oil, how long your engine can run without oil before it is damaged, how to know if you’ve damaged your engine, and the different issues that can cause your engine to lose oil.

No Oil in Car Symptoms

Subaru has identified five symptoms to look out for to determine if your car is running low on oil:

Most cars (depending on how old they are) have an oil pressure warning light that lets you know when your pressure gets too low. The light is connected to a sensor that monitors your oil levels.

This light is great because it lets you know that your oil is low before any damage is done to your engine, allowing you to get your car serviced before it’s too late! The best way to prevent your oil pressure light from coming on is to ensure that your vehicle is getting frequent oil changes.

If you smell burning oil, stop what you are doing and pull over immediately. A burning oil smell can signify that you have an oil leak, which can quickly diminish your car’s oil supply. Oil leaks are also very dangerous because they can cause fires.

If you think you have an oil leak, use a dipstick to measure the oil levels in your car to determine if it’s lower than it should be. If so, don’t keep driving because low oil levels can destroy your engine!

Engine oil helps lubricate the engine parts to make them run smoothly. However, when you are low on oil, these parts start to grind, causing loud clunking. If you hear weird sounds coming from your engine, you may be out of oil.

The oil in your car also helps reduce the friction between engine parts, preventing them from creating too much heat. However, if you are low or out of oil, the friction will increase, causing your engine to overheat.

If your car doesn’t have enough oil, it makes your engine work harder. This will make your car noticeably less efficient. If you notice that your car isn’t performing the way it used to, make sure to get it checked out by a professional.

How Long Can an Engine Run Without Oil Before Damage?

Your car needs oil to function properly. If it doesn’t have oil, bad things will happen, and they will happen fast. In fact, your car can only run for less than 30 minutes until the engine will fail. In most cases, it will fail even sooner than that!

How Do You Know if Your Engine Is Damaged Without Oil?

If you run out of oil, your engine will seize, which will stall your vehicle. If this happens, likely, your engine is completely ruined, or at the very least has some serious damage.

Typically right before this happens, your engine will still be running, but you will hear grinding. If you hear grinding, it may indicate you are headed towards engine failure, so stop driving and get some professional help. It’s better to have a few worn parts than a completely busted engine!

Why Does My Engine Oil Keep Running Out?

Chevrolet gives four reasons why your engine may keep running out of oil:

As mentioned above, engine oil leaks are not a good thing.

Big leaks are usually easy to notice. They often cause large pools of oil to form under your car, or they make the oil pressure lights on your dashboard turn on.

However, large puddles under your car don’t always mean you have an oil leak. One way to tell if you actually have an oil leak is to observe the color of the liquid. For example, red liquid indicates transmission fluid, green or orange liquid is typically coolant, and brown fluid is usually engine oil.

It’s more difficult to notice if you have a tiny leak. When a leak is small, oil can slowly leak out of the engine and congeal on metal components in your car, like the exhaust manifold.

The best way to find out if you have a small leak is to test your oil levels with a dipstick. If you notice that your levels are low, you might have a leak, so you should get your car checked out.

When your engine burns fuel, it creates waste gases that are mainly vented out through the exhaust system. However, some of these gases push their way into the crankcase located at the bottom of the engine.

That’s where the PCV (Positive Crankcase Ventilation) valve comes in. The PCV valve is a one-way valve that allows waste gases to exit the crankcase. This valve sends the gases back into the intake manifold where they are burned up by the engine.

However, if the PCV valve stops working, it can cause pressure to build in the crankcase, which causes oil to leak through the gaskets and seals since there is no other way for the pressure to be released.

The PCV valve can also become clogged, which causes the engine to consume oil and burn it internally, resulting in excessive oil consumption.

To fix this problem, you’ll need to replace your PCV valve, which is relatively easy to do.

However, if you have bad piston rings, the engine oil can seep into the combustion chamber. If this happens, the oil will burn in the chamber, which can lead to serious damage.

The burning oil creates thick blue-gray exhaust smoke. If you notice smoke with these characteristics coming out of your exhaust pipe, failed piston rings are likely the cause of your oil problems.

To fix this problem, you’ll have to get new piston rings installed. This is no easy task, seeing that your engine will have to be significantly dismantled to reach the rings.

If the head gasket fails, it can lead to a variety of problems, including coolant and oil leaking out of the car, oil contamination from the coolant and oil mixing together, or it can cause the engine to consume too much oil.

If a blown head gasket is the cause of your car’s oil problems, you’ll have to replace it. Replacing a head gasket is not easy to do and is considered to be a fairly difficult repair.

Many symptoms indicate your car is running out of oil that you should look out for. If your car does run out of oil, it will typically only run for about 30 minutes before your engine is destroyed. Some things that can cause low oil levels are: