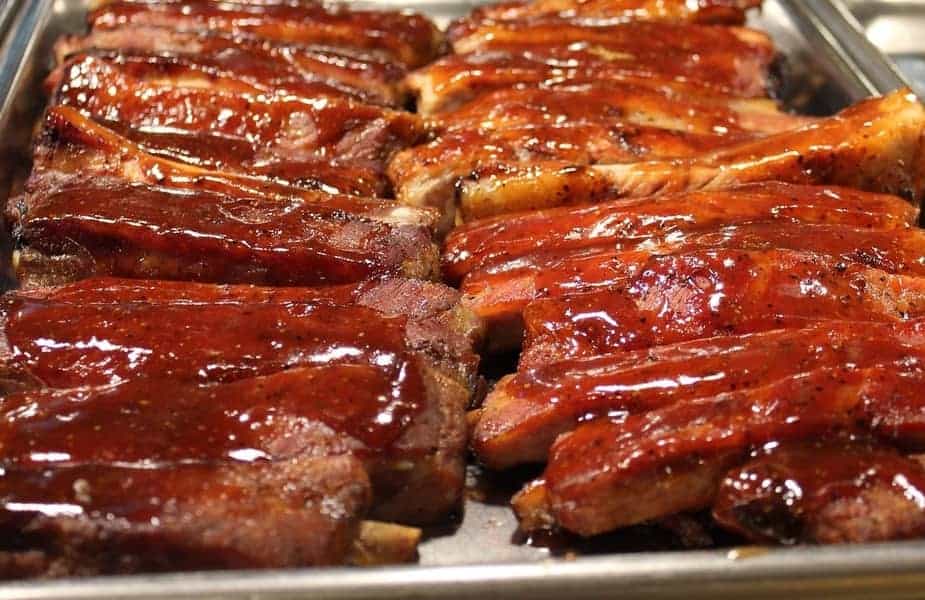 Barbecue sauce is a key ingredient for grilled or smoked meats. Depending on where you live, which kind is best can be hotly contested. But what if you are out of the stuff or want to try something different? Well, you’ve come to the right place.

I’ve tried just about every sauce under the sun (or made my own), and I know what works and what doesn’t.

Here are eight delicious alternatives to barbecue sauce. One of them is even an easy DIY version you can make from scratch.

We make a lot of stir-fries, so we usually have some Asian sauces somewhere in the fridge. These make surprisingly good substitutes for barbecue sauce.

Hoisin sauce is one of the best alternatives because of its texture. By design, it is a Chinese condiment typically found on various meats. Therefore, it closely mimics the thick, glazed appearance and taste appeal of BBQ sauce.

However, it is important to note that this substitute is mainly based on its ability to mimic the textural appeal of BBQ sauce. The taste profile is quite different.

Even so, hoisin sauce shares one or two common ingredients with regular barbeque sauce. Those would be vinegar and, in some cases, honey. The rest of the ingredients found in hoisin sauce include chilies, sesame paste, and soy sauce.

Great for spice lovers: If you like spicy food, then this is an excellent choice for you. The chilies add a bit of heat to the sauce, which could be compared to some spicy BBQ variations.

So yeah, even though hoisin sauce is more Chinese-inspired, it can still be a great alternative to put on any kind of smoked or grilled meat.

Everyone is familiar with traditional BBQ. It has a distinctly sweet, tangy taste and is typically golden brown and reddish in color.

However, in some southern states, like Alabama, there is such a thing as a white BBQ sauce. While this might seem like an unappealing substitute to the original, white BBQ sauce has a pretty strong following.

This white-based sauce features similar ingredients as regular barbecue sauce like ground pepper, vinegar, salt, sugar, and lemon juice. However, the twist is that there is no tomato base.

Instead, the white-base is derived from the use of mayo. Yes, mayo!

Mayo has been implemented in many places throughout the cuisine world, from baking to sauces. It is much more than just something to slap on a sandwich. A white-based sauce is an excellent gateway for someone looking to really explore a tasty alternative to regular BBQ sauce.

Mustard is one of those kitchen ingredients that is more diverse than people think.

At first glance, people associate mustard with hot dogs or burgers. However, mustard has found its way into other savory dishes, including BBQ sauces.

In fact, some mustard-based sauces are often called “golden BBQ” due to their remarkable yellow or dark orange hue. The secret is dijon mustard which packs a little heat behind the sauce.

Mustard sauces that can be used in place of BBQ can include ingredients like honey, ketchup (for a darker yellow or orange color), apple cider vinegar (instead of white vinegar), and even Woreshire sauce.

Using a golden BBQ sauce or mustard sauce will really bring a bit of tang to a BBQ dish. It can be used in various BBQ recipes, including pork or chicken.

Plum sauce is another customary sauce used in Asian dishes.

It resembles BBQ sauce in its sweetness which comes from plums and other fruits and will get perfectly thick and have a similar texture to the regular stuff. Additionally, the sauce also features common ingredients found in BBQ sauce like vinegar and some less-common ones like ginger.

Perhaps the best thing about a good plum sauce is that there aren’t any added sugars. The natural sugars in the plums and fruit can really make the perfect pairing with the vinegar.

By using the plum sauce as a substitute for BBQ sauce, dishes like ribs or even BBQ chicken get a little bit of Asian-inspired flare. This can really spice up bland dinners by creating a slightly different flavor profile.

You could just go with no sauce at all. Some of the best ribs I ever had in my life (In Memphis) had nothing but a dry rub on it. In fact, there is an ongoing debate about whether or not dry spice rubs are better than sauces altogether.

While everyone has their preferences, the truth is both have their advantages. If there isn’t liquid sauce to be found, a dry spice rub is a perfectly acceptable substitution. The meat won’t have that iconic shimmery glaze; however, it will be packed with tons of flavor!

Typical ingredients for a dry spice rub for BBQ include:

The possibilities are truly endless. No matter which combination you use, an excellent dry rub will bring similar flavors to the meat while still having that memorable smoky backdrop associated with sauce.

I know many of the choices on this list have an Asian flair, but there’s a good reason for it. Asian food is well-known for having great sauces to accompany a large variety of dishes. Nothing is more popular than Teriyaki sauce.

Teriyaki is a sweet, thick sauce that has a pretty recognizable taste. It is much like hoisin sauce in that it can have the same thick, juicy texture that mimics BBQ sauce.

Also, like hoisin sauce, teriyaki has other ingredients that aren’t usually found in a BBQ sauce. This includes soy sauce and Mirin.

In order to properly substitute teriyaki for BBQ, other spices should be added to the teriyaki base. This can be done either by making it all from scratch or adding additional spices to a store-bought teriyaki sauce bottle.

Pro Tip: Making teriyaki a good BBQ sauce substitute can be done by adding onion powder, garlic, and chili powder. Chili powder should only be added if someone is looking for a spicier BBQ sauce.

We already discussed how plum sauce is an excellent alternative to BBQ sauce. However, so are other fruit-based sauces. Some bottled varieties of BBQ will sometimes feature a fruit base. Fruits are a great way to cut the acidity down in the tomato base of the traditional recipe for the sauce. Fruits like pineapples, mangos, peaches, apricots, and even apples have been seen as a great additive to a BBQ base.

Because real fruit is being used in the sauce base, the addition of granulated sugar can be significantly reduced. This makes the sauce a bit more wholesome as well because the fruit is merely adding a natural balance to the sauce. Through experimentation (which is what cooking is, right?), these fruits could even be added to mustard-based BBQ sauces!

One of the main ingredients of traditional barbecue sauce is sugar. Not just a little bit of sugar, either! There’s usually an unhealthy amount of sugar in BBQ sauces.

So, I included this on this list just in case you are at the store and want a low sugar alternative to BBQ sauce. I wanted to make you aware that there are low sugar brands out there.

Just keep in mind that sugar is what counterbalances the tomato or acidic parts of a BBQ sauce. This makes diabetics or those on a keto diet unable to enjoy the real, sticky sweet thing.

However, there are alternatives out there for diabetics and keto-dieters! These alternatives are typically branded sugar-free or low-sugar choices of the popular sauce. Here is my favorite brand (Click to see on Amazon).

If you can find it at your local store, be sure to pick it up. If not, I highly recommend just having some mailed to you!

While many of the substitutes listed above could technically be prepared homemade, some of them will come in a bottle from the store. However, preparing traditional barbecue sauce at home is super easy! Not only is it easy, but it is relatively quick as well, which gives ample time for letting the meat simmer and cook slowly in the sauce! Below is a great recipe for homemade BBQ sauce!

Combine all the ingredients in a saucepan and bring it to a boil. Reduce the heat to a simmer (medium heat) and occasionally stir until thickened. The measurements can vary based on how much is being made. Ideally, there should be more tomato sauce, and the spices can be up to a few teaspoons depending on the desired level of spice. The vinegar and sugar or molasses shouldn’t exceed more than a half-cup. Once it is cooked down and thickened, the sauce can be stored in a tight-sealing Tupperware container or a mason jar.

While buying a premade bottle of sugar-free or low-sugar BBQ sounds good (and it is!), it is possible to create a homemade version. In fact, it isn’t too hard at all!

It only calls for a few ingredients like canned tomatoes, a sugar substitute, garlic, salt, pepper, and vinegar.

The tomato sauce should be cooked down and brought to a boil while incrementally adding the spices in. Low-sodium or sugar-free versions of soy sauce can also be used.

The end result is a tasty replica of the real thing!

Homemade BBQ sauce can last in the refrigerator for up to a week. If the barbecue sauce is canned in a traditional manner (use of canning jars and heat to seal it), it can be stored unopened for up to a year.

Being a born and raised Southerner, I take pride in my smoked meats. Personally, I use a dry rub, like this one, for all my cuts of meat and then let people spread some sauce on after it’s ready to it. I rarely cook meat with the sauce added on and feel it’s an inferior way to do it. That’s just my opinion, though. 🙂

I hope this article has given you some good ideas on ways to mix it up a bit the next time you need BBQ sauce. Thanks for reading!