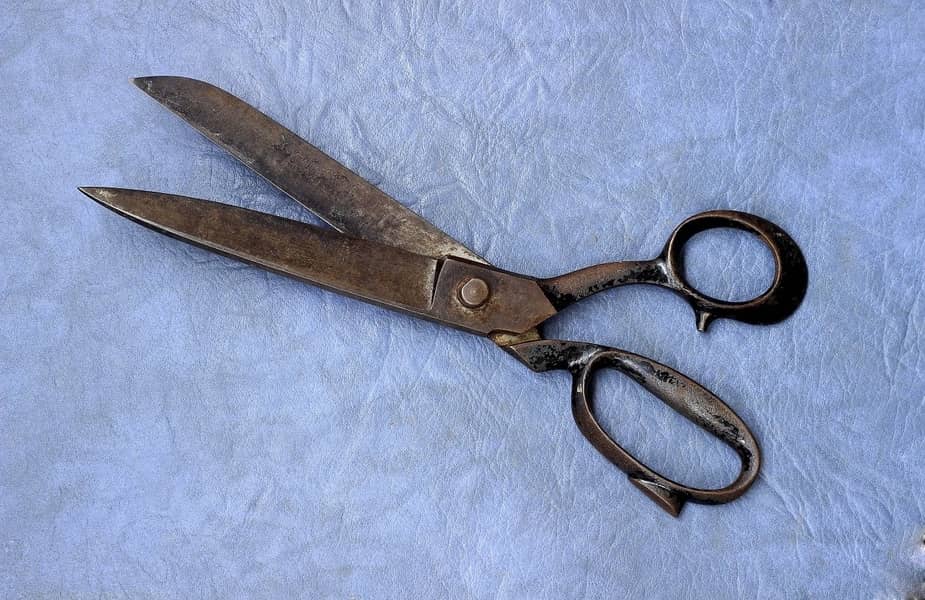 Why bother sharpening dull scissors when they’re so cheap, you can just buy a new pair? Because, sharpening them can easily be done yourself and can save you money. You can sharpen the scissors  by using items you already have at home such as a knife sharpener..

You can use a knife sharpener on scissors, as it is built to accommodate various types of blades. It’s better to use a dedicated scissor sharpener, however, because it was designed specifically for this purpose. A scissor sharpener secures both blades safely and sharpens them simultaneously.

Rather than spending a lot of time and elbow grease manually sharpening scissors with a stone, you can use a sharpener designed for scissors that makes the process nearly foolproof.

We recommend a dual-purpose sharpener like Smith’s JIFF-S 10-second knife and scissor sharpener. Quick, safe, and easy to use, it sharpens left-handed scissors on one side and right-handed ones on the other. Its carbide blades are reversible and replaceable. Its preset sharpening angle guarantees results. It has two stages and two slots: one for scissor sharpening and the other for coarse grinding.

The next level up is Smith’s 50185 Jiffy-Pro Handheld Sharpener, which has three stages and three slots. The third is for ultra-fine grinding.

Luna Regina, the founder of Healthy Kitchen 101, recommends the lightweight Grocery Art’s electric 3-in-1 tool-sharpening machine. This two-stage, multi-angle sharpening kit has features superior to many pricier alternatives. It is battery and electric-operated with a retractable cord.

It has four slots for sharpening scissors, screwdrivers, and knives—a feature rarely found in other handheld sharpeners. It provides a sharp blade after just a couple of pulls.

What Is the Correct Way to Sharpen Scissors?

This depends on what method you use. Generally, it’s best to disassemble the scissors first and then sharpen each blade individually. Use a screwdriver to take out the bolt. If the blades are riveted together, keep one blade safely out of the way while sharpening.

Loh Yiren, knife sharpener at The Polished Edge, says there are a few ways to sharpen scissors, but the general principle is the same. Each scissor blade has two sides: the inner flat side and the outer beveled side. Separate the blades. Sharpen the beveled side heel to tip until a burr* forms on the inner side of the blade. This is a sign that the blade has been sharpened.

Be consistent with your sharpening motions. Remove the burr afterward. Wipe the blades clean. Reassemble the scissors.

If you’re using a scissor sharpener like the Wamery 4-stage kitchen knife and scissor sharpener, open up the scissors and insert both blades into the slot. Push gently five to seven times. Test the newly sharpened scissors on a piece of paper. Repeat as necessary.

If you’re using a manual sharpener, police captain Bill McMahan suggests opening the scissors and taping the side you’re not sharpening. (Others use a Sharpie to mark the side to be sharpened.) Run the scissors on the sharpener like a regular knife. Once the burr is formed on one blade, stop. Repeat the process with the other blade.

Scissors are merely two knives connected at a pivot point. So you can sharpen scissors as you would kitchen knives, with any of these tools:

First, fold the sandpaper, so both abrasive sides show. Using the scissors that need sharpening, cut the sandpaper into narrow strips, about 10 to 20 times. Use the rougher sheet first. Wipe off the remaining sandpaper bits on the blades with a damp paper towel.

If your scissors are very dull, begin with the coarse side and then move to the finer side. If they just need a tune-up, use only the finer side. To remove the burrs formed after sharpening, open and close the scissors a few times. Then use it to cut fabric, paper, or cardboard to ensure the remainder gets knocked off the blades.

Repeat this procedure until the blades have a smooth, clean edge. Use a moist paper towel to wipe off glass particles on the blades.

Can any of these methods or materials ruin scissors? Yes, if done or used incorrectly. If this is a concern, have your scissors professionally sharpened.

What Is the Best Angle to Sharpen Scissors?

The JIFF-S mentioned earlier has a ceramic bar that floats between the blades. It automatically sets itself to the correct angle when scissor blades are pulled or pushed through the opening. It’s important to gently squeeze the scissor handles like you’re lightly cutting a piece of paper. Maintain consistent pressure. All you need are a few passes for sharp scissors.

Yes, according to WikiHow. Use 8-10 inches of aluminum foil. Fold it lengthwise several times until you have a thick folded strip. The layers of foil will sharpen the blades with every cut.

Cut ribbons from the strip with your scissors using full strokes until you finish it off. Cut starting at the base of the scissors up to the tip. The resulting sharpness of the scissor blades will depend on how you cut the ribbons: many thin strands or a few thicker ones. Wipe off the bits of foil on the blades with a paper towel moistened with warm water.

The Exception to the Rule

The above advice does not apply to expensive, high-quality beautician or grooming scissors. Hair shears should be sharpened by professionals either by hand or with an appropriate machine. The wrong technique or equipment can destroy this type of scissors.

Professional knife designer, thrower, and sharpener Thomas Stuckey explains that grooming scissors are easy to damage if you’re not careful because of their small size and the hardness of the metal. Also, haircutting shears have a rounded convex edge, not chiseled. Beautician’s scissors should be sharpened at a specific angle to be able to cut through hair. Only a professional can match that angle impeccably.

Generally, if you prefer a more refined finish, want the job done faster, or wish to simplify the scissor sharpening process, use specialist equipment. This is mandatory for certain edges or jobs that are too risky or time-consuming. On a normal day, however, all you need is a good knife or scissor sharpener or any of the household items mentioned above that you can use as tools for the same purpose. Just don’t get too obsessive and do it too much. They don’t need to be that sharp to work well.

We hope the above suggestions will pave the way for your scissors having a long and happy life.

* A burr is a ridge or rough edge on a metallic object left by a machine or a tool.