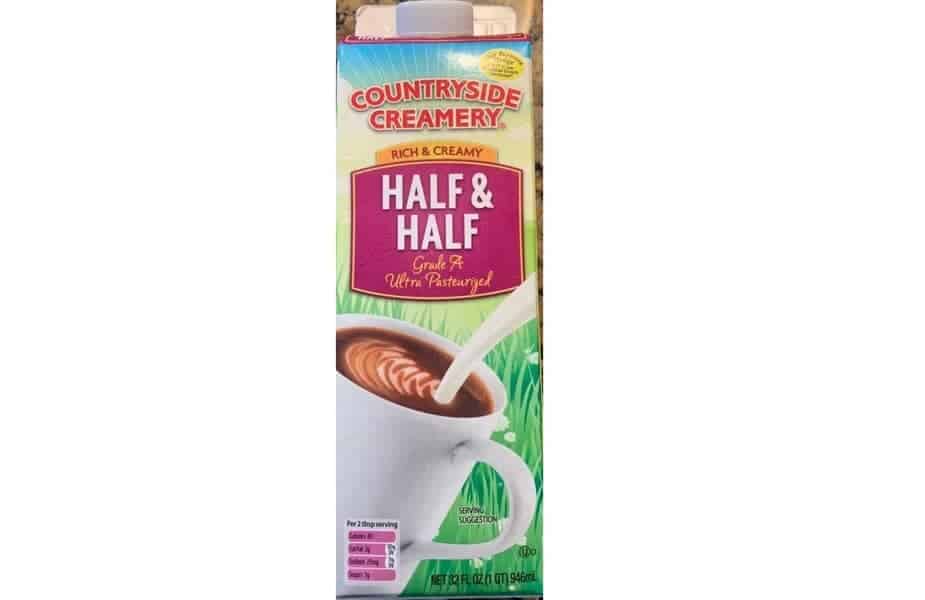 Half and half makes coffee taste creamy and delicious, but most people don’t use it for anything else. For everything else, most people use milk. But what do you do if you run out of milk when you’re halfway through cooking or just about to grab yourself a nice bowl of cereal? You might be eyeing up that carton of half and half and wondering, “Could I?”.

Half and half can generally be used instead of milk in recipes. However, if using it on something like cereal, it is best to do a modification. Adding water is the best method of doing this, and aiming for a mixture of 3/4 cup half and half for 1/4 cup of water will make a reasonable substitution.

This handy guide will tell you how to substitute half and half for milk and provide a few other alternatives as well.

How Is Half and Half Different From Milk?

If you’re wondering what half and half actually is, the clue is in the name! Half and half is made of half whole milk and half heavy cream. This is why it is perfect for your coffee. It adds that extra bit of creaminess, but it isn’t too heavy.

How to Substitute Half and Half for Milk

If you have run out of milk and wonder whether you can use half and half instead, the answer ultimately depends on what you want to use it for.

Half and half is a mixture of 50% whole milk and 50% heavy cream. To mimic whole milk, the fat content needs to be lowered. However, in many recipes, half and half can be used instead of whole milk as it is, without compromising taste or texture.

The important thing to think about is how the creaminess of the half and half will affect what you’re trying to make. In some cases, it might make it even tastier!

How to Turn Half and Half Into Milk

Ok, so you can’t literally turn half and half into milk (it would be impossible to extract the cream!), but what you can do is make it act very similar to milk.

To make your half and half as similar to whole milk as possible, you should use 3/4 cup of half and half to 1 cup of water. This will make a substitute for 1 cup of whole milk. If you want it to be less fatty, add more water unless it reaches the desired consistency.

Can You Use Half and Half Instead of Milk for Cereal?

Nothing in the world is stopping you from putting your half and half in your cereal! Some people swear that it tastes terrific, whereas other people think it’s disgusting. The only way to find out whether you like it or not is to give it a try. Suppose you don’t fancy trying straight half and half in your cereal; watering it down to make it more like whole milk would also work.

Can Half and Half Be Substituted for Milk in Recipes?

Half and half is only half milk/half heavy cream. There isn’t anything strange in there that would ruin your recipes.

Generally, half and half can be substituted for milk in your recipes. In fact, the extra fat in half and half could add that extra creaminess to your dish and make it really stand out. If you don’t want your dish to have any extra fat, you can water the half and half down to make it more like milk.

Another option to reduce the recipe’s fat content is to take a little of the oil out of the recipe elsewhere.

So you don’t have any milk, but you are also out of half and half. Disaster! But don’t despair. There are numerous alternatives to milk that you could use.

Check in the back of your cupboard to make sure that you don’t have any powdered milk hiding there. You can reconstitute milk from powdered milk using the instructions on the packet. If you are baking with it, you can often mix the powdered milk with the dry ingredients and then add the necessary amount of water later with the wet ingredients.

Plant-based milk alternatives are also a great option to use instead of dairy milk. They each have their own flavors and fat/protein/starches, but, in general, they can be used instead of milk exactly as they are.

There are loads of different kinds out there, such as almond milk, coconut milk, soy milk, hemp milk, oat milk, and rice milk.

Soy is generally thought to be the closest to dairy milk because it has the same protein and fat content, but any plant-based milk alternative that you can find will work. You might even find that you prefer that bit of coconut flavor in your cereal!

Can I Use Half and Half Instead of Buttermilk?

Half and half can be substituted for buttermilk in most recipes. However, you may want to add an acid to the mixture to compensate for the acidity of the buttermilk that would be lost with the substitution. Good options are to add 1 teaspoon of vinegar or citrus juice per cup of milk.

Also, if buttermilk is being replaced in baking, you may need to make another small modification. Most recipes will add in baking soda to compensate for the acidity of the buttermilk. Therefore, you can just leave out the baking soda when replacing buttermilk with a substitute.

If you are out of milk and want to use half and half in a recipe instead, you can substitute it as it is. It will make whatever you’re cooking, baking, or eating more creamy, but that might be a good thing.

If you don’t want the extra cream, you can make half and half more similar to whole milk by mixing 3/4 cup of half and half with 1/4 cup of water. If you’re out of milk, powdered milk, evaporated milk, or any plant-based milk alternatives will work just as well.

An endless number of culinary favorites begin with cream of mushroom soup. But starting a recipe that calls for this staple and then realizing you are out can be annoying, to say the least. Put an...