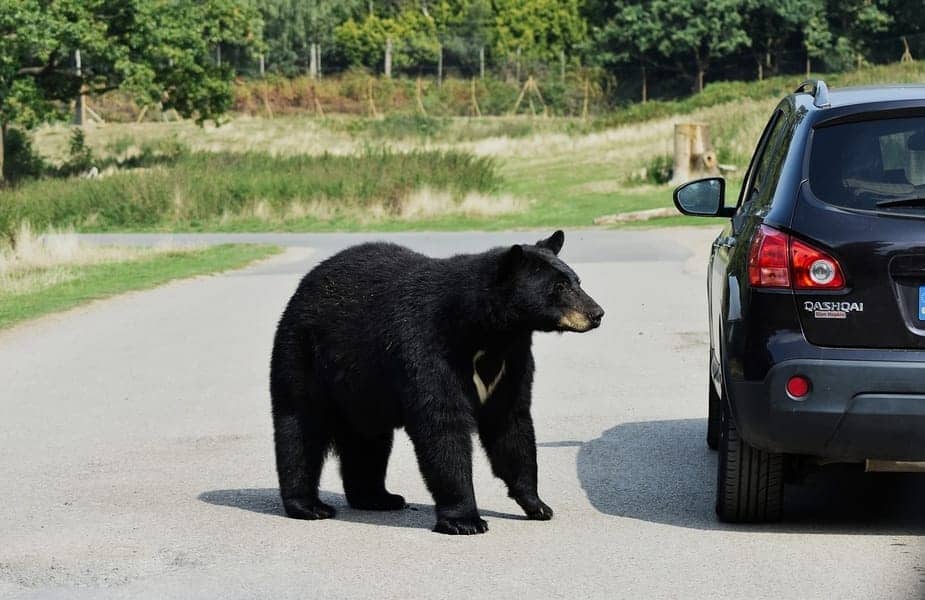 With the depletion of habitat and the ever-narrowing separation between humans and wildlife, close encounters between man and beast are inevitable. And if the beast happens to be a bear, what should you do?  Run? Stand still? Try to frighten the bear with loud sounds?  It has been suggested that hikers carry an airhorn with them to scare the bear.

The biggest issue, however, is whether the bear will leave, or at least not approach if you startle him or her with noise.

The jury is still out on whether using an airhorn will be profoundly effective in routing a bear back into the woods or set him on a gallop in the opposite direction.  Wildlife experts tend to agree that it’s not the wrong thing to do, but it may not necessarily be the best thing to do.

These are seen as good reasons to use noise – like a blast from an airhorn – to frighten a bear away:

These are offered as reasons a loud noise might be ineffective in frightening a bear away:

Using Sounds to Deter the Bear

Quite often, backcountry hikers in areas known for bears will attach a bell, resembling a cowbell, to their gear while they walk. The constant clanging alerts bears and possibly other potentially dangerous animals to the humans’ presence.

Loud talking, whistling, or even singing can have the same effect. For the most part, bears want nothing to do with humans – or with anything making that much noise – and will retreat into sheltered areas until they feel safe again.

This is generally an effective practice, but in areas where human/bear encounters are frequent, the bears become familiar with the sounds, smells, and habits of the humans, and some of the bears’ self-preservation instincts become less impulsive. The urge to flee or hide is lessened, and curiosity may even draw the bears closer.

If you carry an airhorn, limit its use to situations that are truly dangerous, like you and the bear being in sight of one another, or in the case of a charging bear. Do not hike and blow the airhorn periodically, because if all the hikers did it, bears might get used to the sound.

Bears have hearing that far surpasses that of humans. Sudden, loud noises are doubly startling to them, as with your family dog that freaks out over thunder or clanging metal. If you see a bear in the wild, the chances are excellent that he’s already heard you, and has probably already seen you.

But he has no idea what’s about to come if you get out your airhorn. The blast should be something terribly disturbing to him, and it stands to reason that he would take off running – hopefully away from the sound.

Chances are, a bear – especially one way up in the backcountry – has never heard anything remotely like an air horn. He may have heard humans talking, shouting, etc. and he may have heard a cowbell, but this is a brand new sound. The double whammy of high volume plus a totally foreign sound is likely to set him to flight.

In many parts of the country, state fish and wildlife personnel use loud noise to shoo away bears that have wandered into areas where they are likely to encounter humans. In Canada, in places like Banff National Park, where grizzly bears are plentiful, wildlife managers do indeed use airhorns to frighten bears away from townships and campgrounds.

This is where the issue gets complicated. Some wildlife managers say the evidence supporting the use of airhorns as a bear deterrent is inconclusive, while others are convinced that using airhorns works. The picture gets muddier still when the question regards repeated exposure to airhorn blasts.

It’s reasonable to expect that a bear, rummaging through a dumpster on the outskirts of town will bolt and run the first time it hears an airhorn. But suppose he comes back the next week or the next month and gets another blast from an air horn. Will it have the same effect the second time around?  Or the third?

Bears who wander into areas inhabited by humans have already ignored a few danger signs, so exposure to things like being shouted at, people banging on pots and pans with hammers and getting their ears pinned back by a blast from an airhorn may become too commonplace, and they grow oblivious to it all. Hunger is a great motivator, and wild animals will take risks of all sorts to obtain food.

Clearly, more research needs to be done in this regard.

When the Airhorn or Other Sounds Might Not Work

Creating sounds to discourage the approach of bears will not work in every case. Some distractions and situations are too distracting or important to bears and will result in them ignoring sounds that might ordinarily give them a flight reaction.

Avoid Moms and Their Cubs

When traveling in bear country, the worst place you can be is between a momma bear and her cubs. All reason, all instinctive fear and all trepidations the momma bear might otherwise feel are often washed away in a single charge.

If you see a cub and not the sow, get away from the cub(s) while quickly scanning the shadows for the adult female. The momma is most assuredly nearby, and she probably is already watching you. She may growl and snarl and perform a bluff charge, but do not panic. Stand still, make yourself as large as possible and even “talk” to the bear in a pleasant but affirmative manner, all the while looking for an escape route.

It’s unclear whether using your airhorn against a charging female protecting her cubs would help. There is little data to support or refute this option.

A Feeding Bear is a Distracted Bear

“Bad” bears that show up over and over again in town dumps or repeatedly in the same campgrounds have lost their fear of man. Some of them may even have numbers spray-painted on their flanks to identify them as troublemakers.

It’s safe to assume that any loud noise from you is going to be ignored, or in a worst-case scenario, provoke an angry reaction. Hungry bears don’t like competition.

He might not have even noticed you because he is predisposed to foraging for food.

If that is the case, make sure he doesn’t see you. Move out of his line of sight as quickly as you can and as quietly as you can. This is one time when you don’t want to announce your presence to a bear.

The Bears of the U.S.

Are air horns dangerous? Many loud noises can cause hearing loss, and since an average air horn can emit 129 decibels of noise and the threshold for hearing damage is 85 decibels they can be dangerous to your hearing.

What happens if you inhale an air horn? Inhaling an air horn can cause dizziness, rapid heartbeats, slurred speech and a host of other undesirable short term effects. Long term effects can include suffocation, seizures, brain damage, and even death.

What gas is in an air horn? Typical air horns are constructed to use simple compressed air which is pushed through a reed to generate loud sounds.