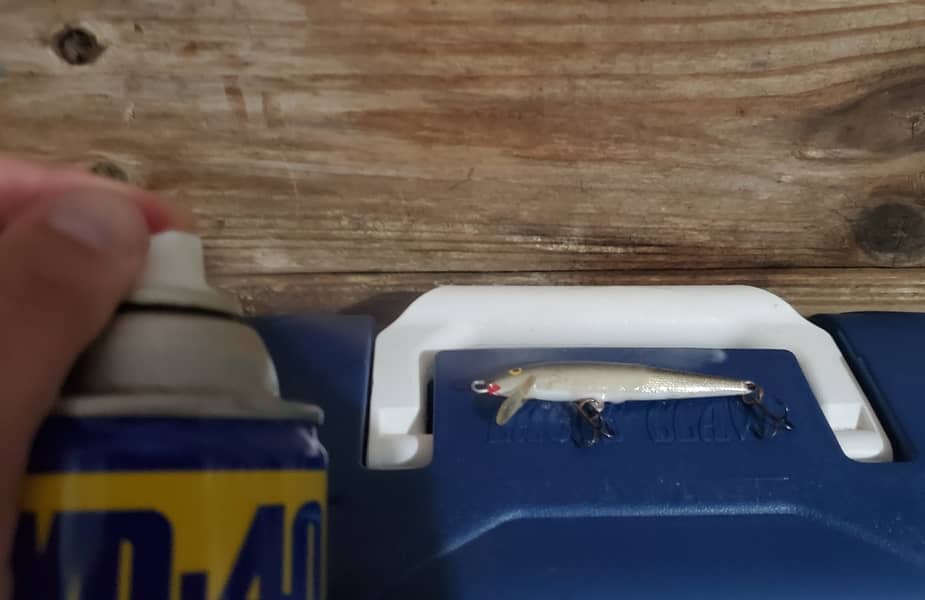 A rumor has been around for years that spraying WD40 on a lure will attract fish. Some people swear by it, others think it’s ridiculous. I was curious, so I looked into the matter. This is what I found out.

While some people say they have caught fish using WD40 as bait, there is no proof to support this. In fact, the company itself does not approve the use of its product as bait saying on its website, “WD-40 Company does not recommend using WD-40 to attract fish.“

So why do some people claim that WD40 works as a fishing bait? What should WD40 be used instead? We will look at the answers to these and other questions below. But first, let’s establish what it’s made of and the intended purpose of the stuff.

What Exactly Is WD40 Anyway?

WD40 stands for “Water Displacement, 40th Formula.” It is a type of penetrating oil that can get into small spaces between stuck and rusted parts. The oil then lubricates these parts in their rough threads. After this, the parts can be undone.

Because of the oil content of WD40, it can also be used as a general lubricant, a cleaner, and an anti-corrosion application. It is versatile and can be used to care for many pieces of gear and equipment or to clean many stubborn stains and products.

Interesting Fact: The exact formula for WD40 has never been revealed. People have speculated for years as to the exact amounts of the components, but with no great success. The main chemical parts are public knowledge for safety reasons, but the exact amounts of these ingredients are not shared. WD 40 was never patented so that the company never had to reveal the exact ingredients in their ‘special sauce.’

We know that it mostly consists of kerosene, petroleum-based oil, aliphatic hydrocarbons, and carbon dioxide as the propellant. It is not generally considered safe for human consumption but is it not toxic either.

Is WD40 Good for Fishing Bait?

Using WD40 as fishing bait is an old fisherman’s trick that developed into a common myth about the product. Many people have claimed that they’ve had great success when WD40 has been used on fishing lures to catch fish.

USA Today claims that WD40 covers the human scent that may cling to your lures when you put them on your line. The thought is that this scent may deter the fish in the water. This is apparently what makes it so effective as a fishing product.

While WD40 may cover the scent of human hands, it is unlikely that this would make a big enough difference to attract fish. Not deterring the fish is not the same as attracting them. You still need an effective lure to bring them to you.

Some people also thought that WD40 contains fish oil and that this would attract the more predatory fish to your bait. WD40, however, does not contain fish oil, making this absolutely untrue.

Is It Illegal to Fish With WD40?

While WD40 may potentially be dangerous to the environment, it is not, in fact, illegal to use in fishing. It is not strictly toxic in small quantities, so no laws are restricting its use in fishing.

However, something to consider is that if you use WD40 as bait, you will potentially ingest the WD40 when you eat the fish later. So, if you don’t want to eat WD40, you may not want to use it on your bait.

Because WD40 is an oil, it will leave residue in the water you’re fishing in. So, purists may want to avoid adding any extra oil components to the water while it is not illegal to use. There are also many ways to use WD40 in fishing without using it as bait and potentially harming the environment.

Is WD40 Made From Fish Oil?

One of the main reasons WD40 was thought to attract fish is because it was thought to contain fish oil. The fish oil would supposedly attract more predatory fish to the lure. Some people continue to claim that WD40 contains fish oil, but this simply isn’t true.

The WD40 company website itself declares that there is no fish oil in its product:

“Consumers have told us over the years that they have caught some of the biggest fish ever after protecting their fish hooks and lures with WD-40®. We believe this legend came from folks assuming that the product must contain fish oil since it appears to attract fish. Sorry Charlie®, it just ain’t so.”

The Language of Branding

Uses for WD40 in the Sport of Fishing

While you can still use WD40 on your fishing lures if you want, it has more effective uses in the sport of fishing. These include:

While WD40 is an extremely versatile product, it is not meant to be used as a fishing lure. The company itself does not recommend using it as a lure. As stated on their website, “WD-40 Company has taken steps to respect and conserve the environment, and encourages its users to do the same. While WD-40® can be used to help protect fishing equipment from rust and corrosion, WD-40 Company does not recommend using WD-40® to attract fish.”

WD40 does not contain fish oil, as some people once thought. It does not attract more predatory fish because of this.

Though it may potentially cover human scent when you apply your lures, this may not be extremely effective. It may not make up for the potential harm to the environment or the oil residue that can be left from the water’s lures.

WD40 does, however, have many other uses in the sport of fishing. The number one use is that it’s a great way to care for and extend your gear’s life.

link to 6 Handy Alternatives to WD40

Continue Reading
link to Can I Use Nesquik Instead of Cocoa Powder in a Recipe?