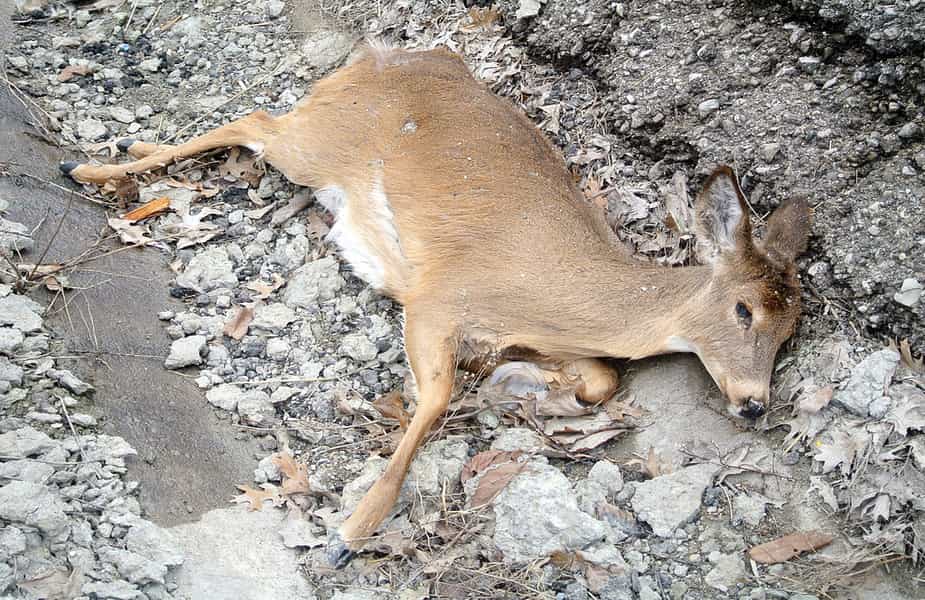 Long gone are the days when our ancestors needed to hunt game or collect dead animals, like deer, to go to sleep with their stomachs full. Undoubtedly, even today, eating roadkill is one of the most underrated survival resources we have. Thousands of animals each day fall victim to motorists, but could they make a good meal?

Whether it is safe or not to eat deer hit by a car depends on the timing, legalities, and the state of the animal’s body. No formula fits all situations, but freshest roadkills might be edible. Having an understanding of the local laws and proceeding to visual examination are essential steps to take.

Of course, these are just the basics. But let’s have a look in more detail at what you should do with a deer hit by motorists and whether it would make a good and safe meal.

How Can You Tell If a Roadkill Deer Is Still Good?

If you have not turned vegetarian just yet, the deer that has just fallen victim to a car’s wheels might look like fresh meat to you. In brief, that is precisely free food. However, there are precautions that you need to take before storing it in the trunk of your car and making a meal out of it.

In the case of animals belonging to protected species, you should get in touch with relevant organizations or authorities for examination. However, if you just had a close encounter with a deer, you won’t necessarily need to see it go to waste. Below are 8 questions you need to ask yourself before eating roadkill:

1. How Long Has the Deer Been Dead?

In no case, you should assume that a dead deer is okay to eat and not examine it. Indeed, a dead animal that stays on the road can quickly spoil in anything longer than 10 to 15 minutes, depending on the area’s climate.

In that case, the meat would be dangerous to cook with or inedible altogether. Alternatively, if you have just hit the deer with your car or you have witnessed another motorist’s accident, you can proceed to visual examination by asking the questions below.

2. Do the Eyes Look Clear or Cloudy?

If it was not you that killed the deer, you should start by examining its eyes to understand if it is safe to eat. If they are clear, it means that it has not been dead for long. Oppositely, if you notice its eyes being cloudy, the deer might have been killed quite a few hours back, and it is not safe to eat anymore.

Instead, if you know for sure that you are dealing with a fresh kill, but the eyes show creamy discharges, while that animal is fresh, it might have been sick, and you should not eat it.

3. Is the Skin Still Soft, or It Shows Signs of Rigor Mortis?

Rigour Mortis in animals can take quite some time to settle. If the deer has not been dead for a while, you should be able to move the skin effortlessly by pinching it. Oppositely, if you notice stiffness or skin that is attached to the muscle, death occurred too long ago, and you should leave the animal alone. Lastly, if the fur detaches easily from the skin underneath, you are dealing with an inedible deer.

4. Are There Bugs and Insects on the Animal’s Skin?

Fleas are common pests that you might have to deal with if you have a dog. Similarly, they feed on warm blood in deers. As the animal dies and the blood goes colder, fleas will move onto another host. Scan the fur: if you notice fleas, it means that the blood of the deer is still warm enough.

If an animal has an impact with a car traveling at 50 miles per hour, there will be blood. However, analyzing what this looks like can give you an indication regarding the state of the meat. Dry paddles of blood around the body mean that the animal has been in the sun for some time. In turn, the high temperatures of the road might have contaminated it.

6. Does the Deer Smell Bad?

Even though the deer might look perfectly edible at first glance, trust your nose. If it smells rancid or putrid, it has probably been dead for too long already.

As you might have already guessed, if the accident happened in sub-zero temperatures, the surrounding environment might have conserved the meat for longer. Oppositely, if you see a deer on the side of the road when outside temperatures soar 30°C (86°F), you should consider it spoiled.

As we have mentioned, an impact with a running vehicle would have caused damage to the internal organs of the deer. If these have exploded, the meat might be tainted and therefore inedible or even dangerous to eat. You are more likely to salvage Some parts of large animals such as deers, yet that is not guaranteed.

Can You Get Sick From the Roadkill?

Generally, you should apply the rule that roadkill is not safe to eat until you prove otherwise. Indeed, there might be many contaminating factors such as bugs, larvae, previous sickness, wounds, or health conditions. If a dead deer boasts these conditions or was on the road for too long, you are bound to suffer the effects of food poisoning by eating it.

However, if you have examined it thoroughly or it was you that killed it not long ago, you might consider eating it. In any case, you should ensure that there are parts that you can salvage before trying to bring it home.

Is It Bad to Eat Roadkill?

Oppositely, as reported by PETA, eating roadkill is potentially one of the most ethical ways of consuming meat, since the animal is already dead. Moreover, a wild animal would have been following a healthier diet compared to the farm and battery animals.

However, you should ensure to read and understand the laws and regulations regarding the keeping and eating of roadkills. Today, this practice is widely embraced in over 20 states, including Washington, California, and Vermont.

Make sure to report the death to the relevant authorities and ensure that you are not about to cook a protected species. In some cases, an animal might need to be examined or used for further studies. Reporting the kill helps compile exhaustive statistics of the death that happen on the States’ roads and introduce better safety measures.

Studies tell us that hundreds of animals are victims of the road each year. These roadkills include squirrels, deers, bears, reptiles, and even the protected population of some National Parks such as Yellowstone.

While such facts can seem worrying to you, keep in mind that these data only refers to the reported roadkills. The estimated number of unreported killed animals is outstanding.

As reported by experts, it is safe to eat an animal that died from injuries caused by a car accident. However, you should not assume so in any situation. Instead, you should check the look and smell of the deer to ensure that it was a healthy animal, and the meat is still edible.

Moreover, it is essential to assess the influence of climate, temperature, bugs, and status of the body before trying to bring the roadkill home. Lastly, legalities vary depending on the specific location: to avoid infringing any local law, check the requirements, and report the kill to the authorities.