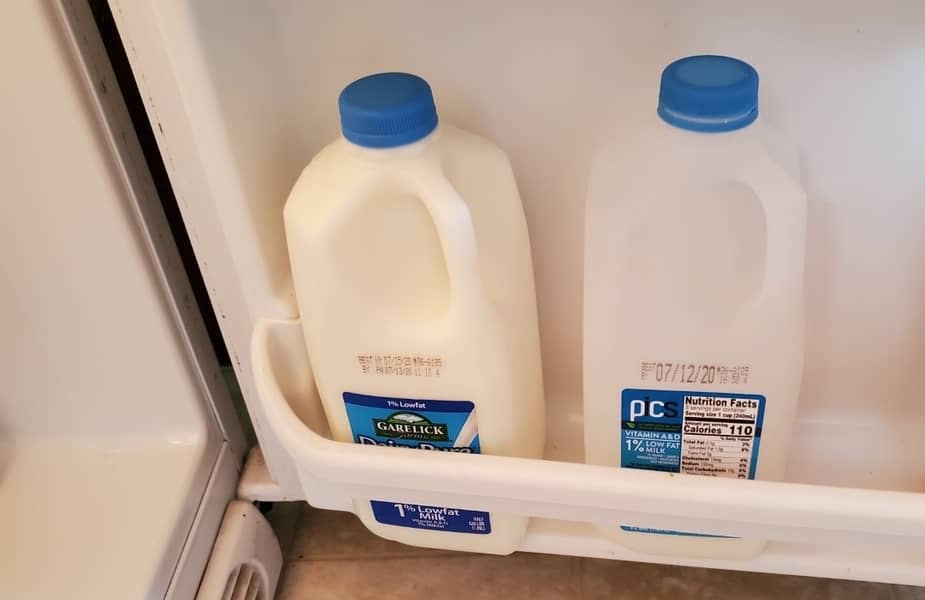 Milk is ubiquitous in modern life. From its place at the breakfast table to being the base component in butter and cheese, it is an ingredient many of us can’t live without. Thus, most refrigerators have milk inside of them, and the manufacturer’s stated expiration date guides consumers as to when it should be used by. However, is that date a hard and fast rule, or is there some leeway on the date?

If you treat your milk correctly, then it can last long past its started expiry date. Preserving this commodity well can help save money by buying milk in bulk and not throwing unused volumes down the drain.

How Long Can Milk Last In The Fridge?

Milk from mammals lasts longer than its expiration date, usually up to a week into the future if refrigerated properly. To achieve this level of preservation, the refrigerator needs to be maintained below 40 °F. This temperature is vital as it is below the optimal replication temperature for bacteria.

Important Fact: At above 40 °F, bacteria will multiply every twenty minutes. As a result, following two hours at room temperature, milk is no longer safe to consume as the bacterial content will be too high to be safe. Drinking spoiled milk will lead to digestive issues and even the contraction of foodborne illnesses.

During the life of your milk, there are several things you can do, even once opened, that can elongate its shelf life:

By doing all of these things, your milk will last far longer than the expiration date printed by the manufacturer.

Interesting Fact: The length of time milk lasts is actually dependent on the fat content of the product. Kinds of milk that are fat-free or reduced-fat will last longer than whole milk. That is due to the fats in milk, providing a food source for some bacteria and other microbes, making it easier for them to replicate and spoil the milk.

How Long Does Milk Last In The Freezer?

There are several reasons why you may need to freeze milk, from supply shortages to having so much you cannot use it all before it expires to storing breast milk for your infant. Luckily, freezing milk is an option, extending your milk’s shelf life for up to a year.

Following this time frame, however, the milk will start to absorb odors from the freezer, making it less desirable to drink. However, the drink’s nutritional content will remain intact, provided it wasn’t expired when it was frozen.

To freeze milk, keep it in its original plastic packaging, or use a freezer-safe container, like this type found on Amazon. Leave sufficient room for the milk to expand at the top, so remove some liquid if necessary.

Proper Thawing Technique: Once you are ready to thaw, place the milk in the refrigerator, and let it slowly return to a liquid. By doing so, the texture and flavor of the milk will be preserved best. Shake well before drinking to help the fat molecules that have come out of solution re-suspend. Don’t be concerned if you see a fat clump or two in your thawed milk, though. It is normal!

How To Detect Spoiled Milk?

Consuming milk that has spoiled will likely lead to suffering digestive distress or contracting a foodborne illness. You can expect to experience stomach cramps, diarrhea, vomiting, fever, chills, and nausea for up to a week. To avoid contracting such an illness, it is best not to consume expired milk. Luckily, there are several ways to detect if your milk has spoiled.

To tell if your milk has expired, you can use your senses:

Pro Tip: If you are unsure whether your milk is still good, place some into a glass and microwave for one minute. Milk that is good will remain the correct white color and will be void of lumps. If, after microwaving, you detect anything out of the norm, the milk has spoiled and should be discarded.

All milk is sold with an expiration date, which is well within the time frame in which it will expire and become unsafe to consume. The flexibility of the expiration period is to save manufacturers from possible legal issues. Therefore, manufacturers use conservative best by dates to ensure that the product is still in its best condition when sold and used.

Types of milk that have a low-fat content tend to last longer as there microbes in milk that survive off of fat which will thrive and spoil the whole milk readily. Milk longevity is tied directly to the bacterial content of the liquid.

Once a threshold is reached, the milk will smell sour, become clumpy, and possibly be discolored. These are all signs that the milk is no longer safe to consume. To preserve your milk, keep it refrigerated below 40 °F at all times, away from light in a well-sealed container. Any milk that has been allowed to come to room temperature for more than 2 hours should be discarded immediately.

A Brief History of Milk

Milk is defined as the liquid produced by the mammary glands of mammals. This fluid is white, nutrient-rich, and biologically intended to be the primary food source for the mammal’s infant offspring. It exists to provide their youth with a balanced diet as they cannot digest other forms of food, and early milk from a mother contains antibodies to protect their young from diseases.

Dairy milk, i.e., farmed milk, is taken from animals during, or soon after pregnancies. Milk is an emulsion (where two immiscible fluids are blended) of butterfat globules within a water-based mix of dissolved carbohydrates, protein aggregates, and minerals. Its combination is designed to promote growth; thus, it is full of lipids, amino acids, fatty acids, and other essential nutrients for survival.

Quickly, humans discovered this natural elixir and how it would be beneficial after cows were domesticated somewhere between 8-10 thousand years ago.

While the exact origins of drinking cows milk are unknown, the prevailing theory places the practice beginning in the Northern European countries shortly thereafter. It is suspected that starvation drove farmers to try the milk and realizing its nutritional value changed civilization.

Interesting Fact: Evolution has played its part in or tolerance of lactose, which is a crucial component of milk. Humans were lactose intolerant until the enzyme lactase started to be produced by humans some 7,500 years ago.

What is Plant-based Milk?

Traditionally, when people use the term milk, they are considering cow’s milk. However, with the advent of niche markets and specialized products, many more milk varieties have become commonplace in the grocery store. From oat milk to soy milk, many plant-based kinds of milk have flooded the market. So, what then makes a product constitute milk?

Plant-based, non-dairy types of milk are derived from water-based plant extracts. There are many forms, soy, oat, coconut, rice, etc.. However, it can be confusing for consumers to call these products milk, even though they are packaged and used similarly to milk derived from a mammal. Due to this inconsistency, in the European Union, you cannot call non-dairy kinds of milk, milk.

What is Ultra-pasteurized Milk and How Long Does it Last?

Pasteurized milk is milk that has been heated to just below 100 °C (161 °F) for 15 seconds to kill pathogens, destroy enzymes, and vegetative bacteria in the liquid. All milk sold to the public must be pasteurized to prevent diseases from bacteria such as salmonella, listeria, and E.coli. Ultra-pasteurization uses a higher heat, typically 280 °F, applied for 2 seconds before it is rapidly refrigerated.

Although both heating methods kill 99.9 % of bacteria, ultra-pasteurized milk will last three times longer than commonly pasteurized milk. That extended life span is due to the heat killing non-pathogenic bacteria that will lead to the milk’s degradation. Expect your ultra-pasteurized milk to last up to three months before it is opened, and 7-10 days afterward if stored in the fridge.