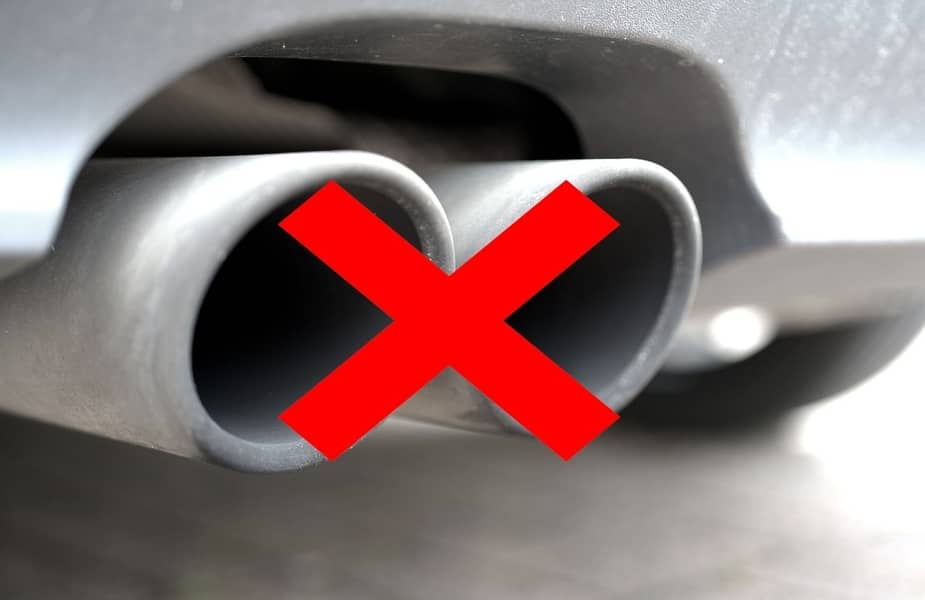 Driving without an exhaust pipe might be something you’re doing intentionally or unintentionally. Perhaps your current set-up cracked when you hit a massive pothole or maybe you removed it entirely to get a louder engine sound. Either way, you want to make sure this is safe.

It’s not safe to drive without an exhaust pipe. Instead of harmful engine gasses being released behind your car, they’ll be exiting at the bottom of your vehicle. This can cause dangerous amounts of carbon monoxide to leak into your cabin. Long-term carbon monoxide exposure can cause death.

The exhaust system of the car is so simple, yet also so complicated. So, let’s go over everything you need to know about what the exhaust pipe does and how this can be dangerous to you as a driver.

What the Exhaust System Does

The exhaust system is one of the most important systems found in a vehicle. Here’s a simple explanation of what this system does and why it’s so important.

That means an exhaust system:

Without exhaust pipes within the exhaust system, the entire system wouldn’t exist.

Here’s a video reviewing exactly how this system works while highlighting the importance of each and every part of the exhaust system.

If you’re driving without an exhaust pipe, it’s probably because your current exhaust pipe has been damaged in some way. Even though exhaust pipes are made of heavy-duty steel, they still become cracked or damaged with normal use.

Some may only last for five years.

Most damage caused to exhaust pipes will come from bad road conditions. Hitting a large pothole and causing your car to bottom-out might directly damage the exhaust system on your car’s underbelly. Driving along roads with large rocks might also do the same.

Normal use might also cause cracking and wear-and-tear, but this isn’t as common.

Signs of a Broken Exhaust

The problem with a broken exhaust pipe is that you might not know it’s broken. That’s because an exhaust pipe sits underneath your car and isn’t visible to you unless you put your car up on a lift at the shop.

Yet, there are a few tell-tale signs that your car’s exhaust pipe might be broken or damaged. Here’s a look at some key signs to look out for:

The louder than normal engine sound might just be what you’re looking for if you drive a sports car or a muscle car. You also might think about getting rid of the entire system if it ends up breaking. Regardless of the reason, you shouldn’t ever drive without an exhaust pipe.

Dangers of Driving Without an Exhaust Pipe

Here’s what you need to know about why it’s unsafe to drive without an exhaust pipe.

The whole purpose of the exhaust system in your vehicle is to get rid of the harmful gasses that build-up in your engine. The system purposely releases these gasses behind, above, or to the side of your car for one important reason: So it doesn’t leak into your car.

A faulty or broken exhaust pipe might cause your vehicle to release these harmful gasses beneath your car instead. As you breathe them in, you’re slowly poisoning yourself.

This can cause carbon monoxide or carbon dioxide poisoning.

Both of these gasses are odorless, tasteless, and invisible, so you won’t even notice that you’re breathing either in. Prolonged exposure might cause:

This is the exact reason that you’re supposed to open your garage door when you’re warming your car up in the winter months.

One of the major dangers that come with exhaust gas is that it exits your engine at extremely high temperatures. A cracked, leaking, or non-existent exhaust pipe might expose nearby car parts to these high temperatures. This can cause your car to catch fire.

An improper exhaust pipe can also put the health of your engine at risk. Excessive heat and lack of backpressure can actually cause major pieces of your engine to become damaged, warped, or burned. This can eventually force an engine replacement in the not-too-distant future.

As dangerous as it is to drive around with a broken exhaust pipe, it also can cause issues with how your car runs. The excess build-up of gas in your engine might cause your fuel economy to go out the window. In the process, your car is also releasing a greater amount of emissions and putting excess strain on your engine.

Then, there’s also the noise factor. A car with a faulty exhaust pipe will allow the gas to escape without traveling through the muffler first. This will cause your car’s engine to sound much louder, possibly loud enough to violate local noise ordinances.

Though these problems might not seem like a big deal right now, high emissions and a loud engine might cause your vehicle to fail inspection later on.

How Much to Fix Broken Exhaust Pipe

Now that you know you shouldn’t be driving around without an exhaust pipe (or even a broken one), you need to bring your car to the shop to get your exhaust pipe fixed.

Be prepared to spend a good amount of money on the replacement.

In most cases, you should expect to spend upwards of $500 to $800 to replace a broken exhaust pipe entirely. This includes the cost of parts as well as labor. Just keep in mind that pricing will vary depending on where you live as well as the make and model of your car.

In some cases, your exhaust pipe might only have a minor crack or scrape that doesn’t warrant a replacement. You might be able to have the crack welded shut by a mechanic for a mere $100 or less. This is a good short-term fix, but you might need to replace the pipe soon.

The exhaust pipe in your car is a minor piece of equipment that has a very important job. It keeps your car running quietly, your engine running smoothly, your emission levels low, and the air in your cabin clean. Without an exhaust pipe, you’re putting yourself at risk for breathing in deadly carbon monoxide as well as possible fires within your vehicle. So, be sure to replace or fix a broken exhaust pipe as soon as possible.