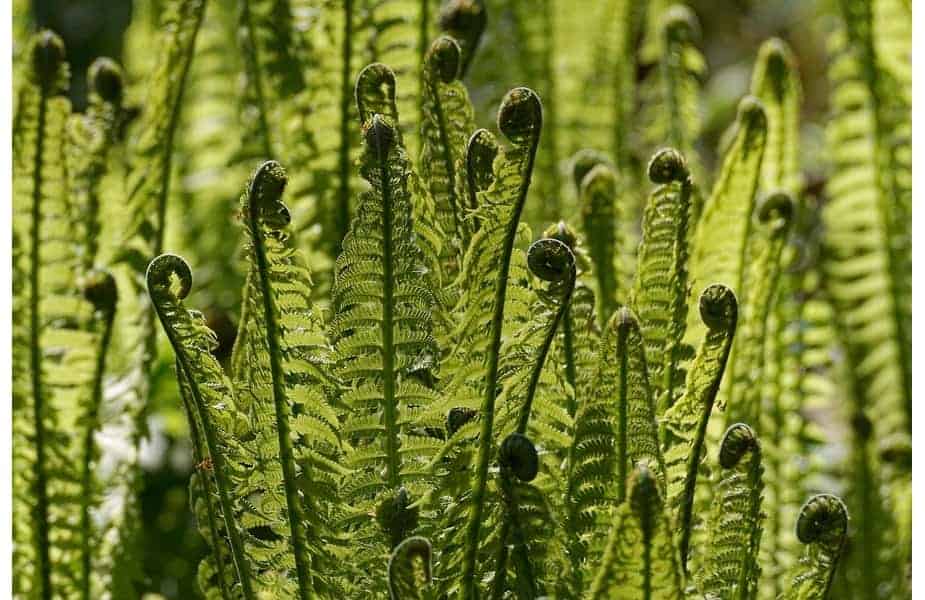 In survival situations, you’ll look to your surroundings for a source of food. In the Spring, young ferns are ubiquitous and some of these are an excellent food source. However, how do you know if you’re reaching for a satiating snack or a poisonous pteridophyte?

Edible ferns are identifiable by their trademark quarter-sized fiddleheads. These coiled young ferns are bright green and appear in early spring in shaded or wet areas. Even though some ferns produce carcinogenic toxins, all fiddleheads are considered safe to eat in moderation with thorough cooking.

Now let’s cover where to look for the fiddleheads of ferns in the wild, how would you identify them, and how do you prepare them to make sure you’re eating safely.

Where to Find Ferns

Ferns have existed for 360 million years, though most of the current 10,560 known species appeared in the fossil record around 150 million years ago. The species have colonized the planet and can be found in any environment, from hot deserts to the tundra.

Despite their globalization, ferns are most commonly found away from the beaten path near a water source. In fact, most species grow in swamp areas in the tropics. Some ferns are rare and protected by law, so only eat them in true survivalist situations.

How to Identify Fiddleheads

There are three common species that you will find in North America with fiddleheads:

In each instance, the edible part of the plant is the furled fonds of young ferns, called the fiddlehead. Fiddleheads owe their name to their resemblance to the ornamental ends of stringed instruments, like a fiddle.

They’re about a size a quarter and if left unharvested will uncoil and become fully-fledged ferns. Their coiled appearance is short-lived, with this phase of their cycles lasting only a few days.

When searching for fiddleheads, don’t look for the coiled structure directly. Often, they will be covered by a light-brown, paper-thin husk. The husk is easy to remove and should not be eaten. Instead, you’ll find fiddleheads by looking at the ground directly for vibrant green stems (it should be in sharp contrast to the dark soil).

Fiddlehead stems grow to a height of four to six inches and tend to grow in clumps of six. Finally, check the shape of the stem itself. It will have a deep groove on the stem that has a very similar shape (depth) to a celery stick.

When picking fiddleheads, pinch and snap the stem close to the fiddlehead itself, leaving most of the stem behind. Additionally, leave a couple of fiddleheads intact. Harvesting the vegetable in this manner will preserve the plant and allow it to grow year after year.

Dangers with Eating Fiddleheads and How to Avoid Them

The safety of consuming fiddleheads has become a polarizing topic due to contradictory reports.

The most contested species is the bracken fern as it contains up to 0.8% by weight of ptaquiloside – a carcinogen compound linked to stomach cancer. However, ptaquiloside is soluble in water and is also unstable at room temperature. Further, it can be destroyed by boiling and by exposing it to salt.

In short, ptaquiloside is a very easy compound to obliterate and remove from the vegetable. Even in a survival situation where you must eat them raw without cleaning, bracken fern fiddleheads will not have a harmful effect on your health; you would need to consume large quantities over an extended period to ingest a toxic dose of ptaquiloside.

Another common concern with eating all ferns fiddleheads is the presence of a B-1 vitamin pathway blocking the enzyme (thiaminase). This is due to some evidence concluding that eating vast quantities of fiddleheads would result in the condition beriberi (B-1 deficiency).

In severe cases, B-1 deficiency can lead to heart failure. However, these instances of poisoning were traced to contaminated groundwater from heavily “ferned” areas where fern spores were present in high concentrations. Another source was found from drinking the milk of animals who had ingested the toxins. Therefore, the evidence concludes that you are not at risk from developing beriberi by eating fiddleheads occasionally.

Indeed, avoiding thiaminase and any toxins in fiddleheads entirely is very easy with some simple food preparation. As with most enzymes, thiaminase is denatured at high temperatures, rending it inactive. This means it can no longer harm you. Similarly, toxins break down and are benign when they’re not in their natural conformation. Therefore, with a little cooking, fiddleheads are perfectly safe to eat.

How to Prepare Fiddleheads

Health authorities recommend boiling fiddleheads for 15 minutes or steaming them for 10-12 minutes prior to consumption. The elevated temperature of the water will neutralize any harmful elements in the vegetable. Additionally, boiling also reduces the tannins and removes the bitterness from the taste.

If you are eating these in the wild as a last-resort source of sustenance and you can’t boil the harmful contaminants away, there are still measures you can take to preserve your health. Soaking bracken fern fiddleheads will help solubilize the ptaquiloside and after a few washes, this carcinogen-like compound is barely detectable.

It’s always best to wash anything you pick in the wild if you can to limit your exposure to foodborne viruses and bacteria. Without doing so, you may contract diarrhea, vomiting, or stomach cramps.

A common method of preparation is to blanch the fiddleheads with salted water, shocking them on ice water before sautéing. However, you will find fiddlehead recipes that suggest baking, frying, steaming, as well as boiling.

Why Eat Fiddleheads at All?

Fiddleheads are frequently used as a substitute for vegetables such as asparagus in many dishes. Due to their global abundance, they are a common component in traditional diets from as far as Russia, to France, to featuring in several Asian cuisine dishes. Often to meet this demand, fiddleheads are frozen so they are available throughout the year, as their picking season can be as short as a week.

Fiddleheads are not only harmless when prepared properly, but they are also a great source of nutrition. They contain antioxidants, omega-3, and omega-5 fatty acids, and are high in fiber, vitamin C, and iron. Like banana’s, fiddleheads are low in sodium, yet rich in potassium.

A cup of fiddleheads contains approximately 44 calories, 6 grams of carbohydrates, 5.6 grams of protein, and 0.4 grams of fat. For these reasons, they are considered an excellent source of “good calories”.

If prepared well, removing the tannins and bitterness, fiddleheads have a unique exquisite taste.

Ostrich fern, which has become ubiquitous with the term fiddlehead, are described to taste like a mix between asparagus, broccoli, and spinach. Others have described bracken and lady fern as akin to asparagus, almonds, and Tucson black kale in a single ingredient.

Even though you may be eating fiddleheads because they were the only source of food around, you’re at least eating a delicacy while you fight for your life.

How do you grow an edible fern yourself? Ideal conditions to grow edible ferns can be achieved by planting them in partial shade, though these plants are resilient and will survive in full sun if given enough water. The moist soil should also be of average fertility, humus-rich, and slightly acidic. The best species to grow for the purpose of eating is the ostrich fern.

Where can I buy fiddleheads? You will find fresh fiddleheads at a farmer’s market for a few weeks each spring. The prices will be high. Commercially produced fiddleheads are becoming more common and with this trend, frozen packs of this vegetable are appearing in grocery stores.