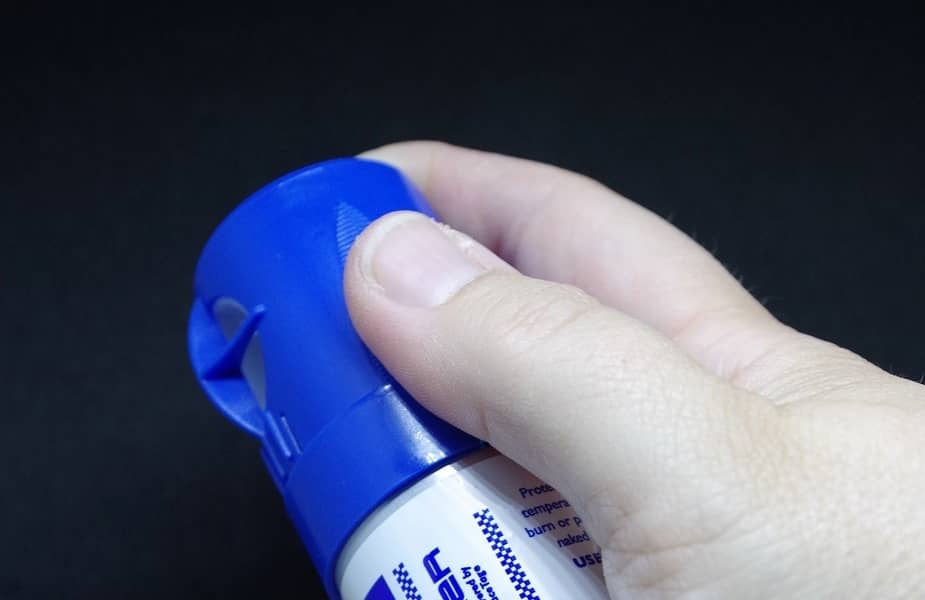 In a world filled with strife, the need to be prepared to protect yourself is becoming more necessary. As the father of three daughters, I was recently looking into options for them to carry. I wanted to see if there were any alternatives to pepper spray. So, I did some extensive research and decided to pass on what I learned with you.

Let’s take a closer look at each option so that you can make an informed decision on which to make use of.

Available at an affordable price, and typically available in containers that can shoot up to 20 feet, hornet spray can blind an attacker and provide an opportunity for escape.

The downside is that hornet spray, like this kind found on Amazon, typically comes in a 14 oz. can, standing nearly 10 in. high, which does not make it the most convenient choice to carry in a purse or pocket.

These keychains often have a bit of decorative metal shaped like a cat or a cat’s head. The “ears” end in sharp points, and what looks like the eyes can allow you to slip your fingers inside and carry the chain in a closed fist, with the “ears” pointed outward. They can allow you to jab an attacker, allowing you to get away.

While affordable and easy to carry, they may not be permitted in some locations, and require some skill and opportunity to use. Unless used very precisely, they are unlikely to disable an attacker. Here is one found on Amazon that claims to be legal in all 50 states.

While disabling, the voltage is generally not high enough to inflict severe or permanent injury on an otherwise healthy individual. Stun guns, like this one found on Amazon, must make direct contact with the target for a few seconds to be fully effective, which makes them a potentially risky choice.

TASER is a brand name but is often used generally to refer to a self-defense tool that utilizes electric probes that are propelled out 15 feet. These devices deliver a powerful electric shock and are designed to be able to reach through clothing to make contact, whereas stun guns need to contact with skin to be effective.

On the downside, these are one-shot options; stun guns can be used multiple times in the same instance. The other primary consideration is that TASERs are not legal for use in every state. TASERs are also considerably more expensive than other options.

Available in hand-held or keychain models, these devices produce a loud sound designed to alert others that someone is in distress.

While extremely easy to use, and able to be carried in places where pepper spray cannot be, they rely on the attacker being concerned that others will respond. This may not be the best choice for individuals who regularly are more isolated areas.

If you decide to get one of these, I recommend getting a model that also comes with a flashing SOS light. Here is one that fits the bill, found on Amazon.

I included this because I think that everyone should learn a little bit about how to handle themselves if faced with danger. In fact, the other items on my list work much better if a person also has the knowledge and ability to deal with an assault on them. A weapon and a martial arts competency are a potent defense against an attacker.

So if you or a loved one are a person looking to take a more active role through self-defense training, there are multiple viable options available. Karate, krav maga, taekwondo, judo, jiu-jitsu, or any martial art is a great option.

Not only do they enhance a person’s ability to protect themself, but they can also be a great confidence builder and introduce the student to a new peer group or competitive outlet. Mastery takes time and money, however, so this is not necessarily the best choice for someone on a strict budget or who needs an immediate option.

Though often used interchangeably, pepper spray and mace are quite different substances.

Pepper spray is a popular self-defense option for a wide variety of individuals. The term “pepper spray” refers to various aerosols containing oils derived from cayenne pepper. The substance is irritating to the eyes and respiratory system. Typically carried for self-defense, it can produce coughing, choking, nausea, and significant pain.

Surprisingly, pepper spray is often more effective when used against an assailant who is under the influence of alcohol or drugs, whereas mace may not be.

Chemical mace referred traditionally to sprays with phenacyl chloride (CN) as the active ingredient. The term now typically refers to any of the sprays under the Mace brand name. Mace offers several types of self-defense sprays, including orthochlorobenzalmalononitrile (CS) tear gas with or without the addition of oleoresin capsicum (OC), oleoresin capsicum (OC) pepper spray alone, and others.

Of course, there is also a cooking spice called mace, which is derived from nutmeg. This spice is unrelated to any defense spray. Although I hear it can make stews taste even better.

Legal in all 50 states, although some apply restrictions, pepper spray is affordable and easy to use. It doesn’t require specialized training or holsters.

Statutes on pepper spray vary by state. While some have no restrictions on carrying pepper spray, others permit it with varying conditions. Anyone wishing to carry or use pepper spray for self-defense should check with their state’s Department of Public Safety regarding what the law permits.

Here are the states with no restrictions:

Important note: Generally, pepper spray should not be carried in schools, airports, courthouses, and other locations where weapons are not permitted.

Of course, you always have the option to carry a gun, collapsible baton, or a knife.

However, as you probably realize, these have several drawbacks, including the necessity for training and varying statutes on these items.

In the end, the best self-defense tool is one that you will have with you when needed and be able to use it. Whether that is a weapon, a spray, or your own two hands, being competent in using it is the most crucial factor.

However, if you aren’t sure, you may just want to stick with pepper spray since it’s affordable and easy to use and doesn’t require specialized training or holsters.

link to Best Pepper Spray for Backpacking, Hiking, and Survival

Pepper spray is an essential part of any survival kit or backpacking setup. You should always have a canister within reach when you’re in the wilderness to protect yourself from while animals. I...

Continue Reading
link to Can You Store Pepper Spray in a Car?

If you’re looking for some safety and protection while you are on the road, then you’re probably considering carrying some pepper spray along with you in your car. If you’re traveling and you...