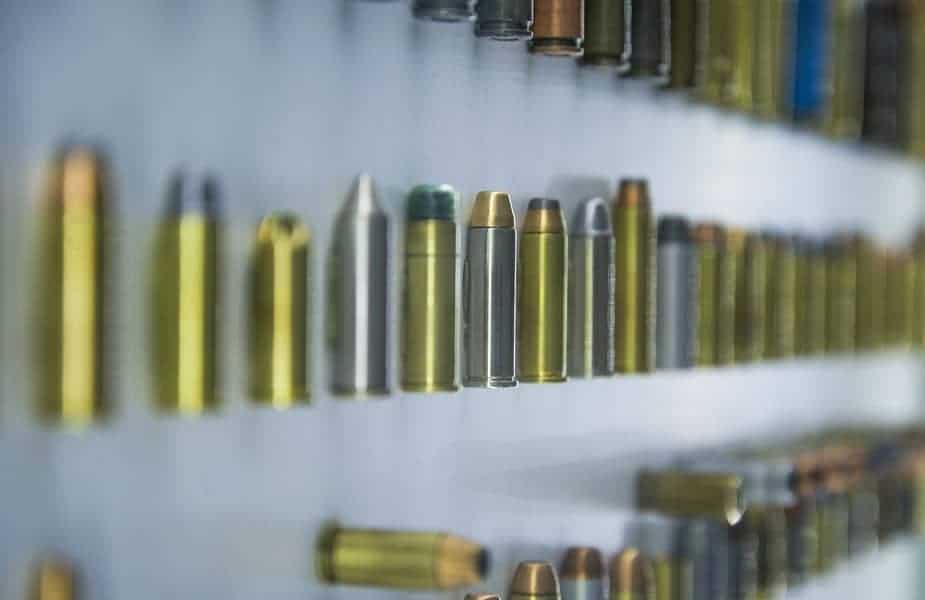 Ammunitions come in many different shapes, weights, and strengths. Though each gun has a specific caliber of cartridge, the weight of the bullet in that cartridge can vary. Bullet weights are measured in grains (gr), and a single grain is one 7,000th of a pound. The grain of a bullet will become more important, the more ammunition you carry.

Below is the average weight of 100 rounds of different types of bullets, using the most common grain for each:

Let’s take a closer look at how the different types of rounds affect ammunition weight.

What many people refer to as the bullet is actually a cartridge. The bullet is only the metal projectile in the tip of the cartridge. The cartridge also contains an explosive propellant (aka, gunpowder), a casing, and a primer. Before we get into the types of bullets, let’s go through some of this ammunition terminology:

Below is the average weight of 100 rounds of some of the most common cartridges:

Keep in mind that these are just examples to give you a good relative idea of the weights you can expect. This will, of course, vary based on the exact components used to build the cartridge out.

The first difference in bullet type lies within the primer. There are either Centerfire primers or Rimfire primers.

In a Centerfire primer, the firing pin of the gun lands directly in the center of the cartridge, giving precise and direct force. These cartridges are more expensive but much more powerful. They are the standard for almost all guns.

In a Rimfire primer, the firing pin lands on the edge of the primer, giving a less accurate, more dispersed amount of energy to the cartridge. These cartridges are much cheaper, usually the cheapest on the market. They are commonly found in .22 caliber rifles and make for great target practice rounds.

The most common type of bullet is the Full Metal Jacket. It typically has a soft metal core, usually lead, with a harder metal casing.

These bullets allowed for easier loading when guns were invented with internal loading mechanisms, and the hand-loaded single-shot firearms were replaced.

This bullet does not expand well within their target, making them potentially less deadly. The bullet often pierces through the target, and can potentially create collateral damage (such as when such in an aircraft or a public place.)

These bullets are just as they are named, hollow in the tip. They were invented as a lighter, faster bullet that would deliver more force. It was later learned that these bullets expanded more upon impact.

This creates greater damage and stopping power, lowers the chance of the bullet traveling through the intended target, and causes collateral damage.

The hollow point bullet is the most common bullet used by law enforcement, as they help limit the chance of hitting a civilian in an open-fire situation. Click here to take a look at the different varieties of hollowpoint ammunition found on guns.com.

Open tip bullets may sound the same as the hollow point bullet, but the hole at the end of the bullet is not nearly as big. This small hole is not meant to help the bullet expand; it is caused in the production process.

Open tip bullets are one of the most accurate bullets. They are usually the bullet of choice for snipers and long-range hunters because of this. Even with this high accuracy, though, many shooters opt for other bullets that are meant to do something upon impact, as the hollow points expand.

Ballistic tip bullets, or plastic tip bullets, are basically hollow point bullets with a plastic tip designed to mimic the shape of a full metal jacket bullet. This means that the hollow of the bullet can be larger because it is filled with plastic to keep the explosive powder inside and provide the aerodynamics of the FMJ design.

This combination of the FMJ and hollow point designs means the bullet is very accurate, yet still expands upon impact like the hollow point, making it highly lethal ammunition.

A boat tail is a tapered shape at the tail of the bullet, making it more aerodynamic. While it can potentially be applied to any of the bullets above, it is usually used on long-range bullets that would actually benefit from this added process.

The boat tail shape is often found in the ballistic tip bullets, to deepen their accuracy even further. It can also be found in hollow point bullets (HPBT = hollow point boat tail), helping to counteract the given drag of the hollow point.

Instead of bullets, the cartridge for a shotgun is a plastic shell filled with metal projectiles. There are three main types of these projectiles.

To take a look at the various types of shotgun ammo and see the pricing, go here to my recommended online ammo supplier.

Within each of these types of cartridges, there are various grains of bullets. Heavier grains of bullets provide more stopping power but lose some of their accuracy. They also make for harder transport when looking at large quantities of ammunition.

Which Ammunition Should You Use

If you’re starting your gun journey, your best bet is to begin shooting with the caliber standard for your specific gun. There are more commonly used bullets, and if you start from there, you will get a feel for what you do and don’t like about certain ammunition.

Once you’ve gotten used to shooting and are ready to fine-tune your shooting experience, you can try different grains or weights of bullets.

If you are deciding on where to buy your ammo, I recommend guns.com. They focus on selling locally as much as possible rather than from warehouses from across the globe. Check out their reviews and decide for yourself.

If you are buying in bulk, the place to go is Palmetto State Armory (PSA). They are well-known for having some of the best prices and customer service.

There are many types of ammunition, and each of these has different advantages. Some of the lightest bullets in the world are the 17 HMR bullets, weighing in at 15 grains, while some of the heaviest weigh in at 750 grains BMG .50 rounds.

Deciding on bullet grain is not nearly as important as deciding upon which type of bullet you should use, so it’s best to start there.

I hope this article has been helpful. I’d love to hear from you in the comments below. Let me know if you have any suggestions or if you found any errors above.

For more, don’t miss Storing Ammo in Ziplock Bags | Should You Do It?.

link to 3 Best Places to Sell Guns and Ammo Online

Whether you are a business selling firearms and ammo or an individual with extra stock, it's challenging to find a good place to sell it. The goal is to find an auction service that makes the process...

Continue Reading
link to How Much Does Ammo Cost? | Detailed Price Analysis

Whether you own a firearm for hunting, sport, or home defense, one of the cost considerations is the ammunition price for the weapon. Ammo cost affects your budget for recreational shooting as well...