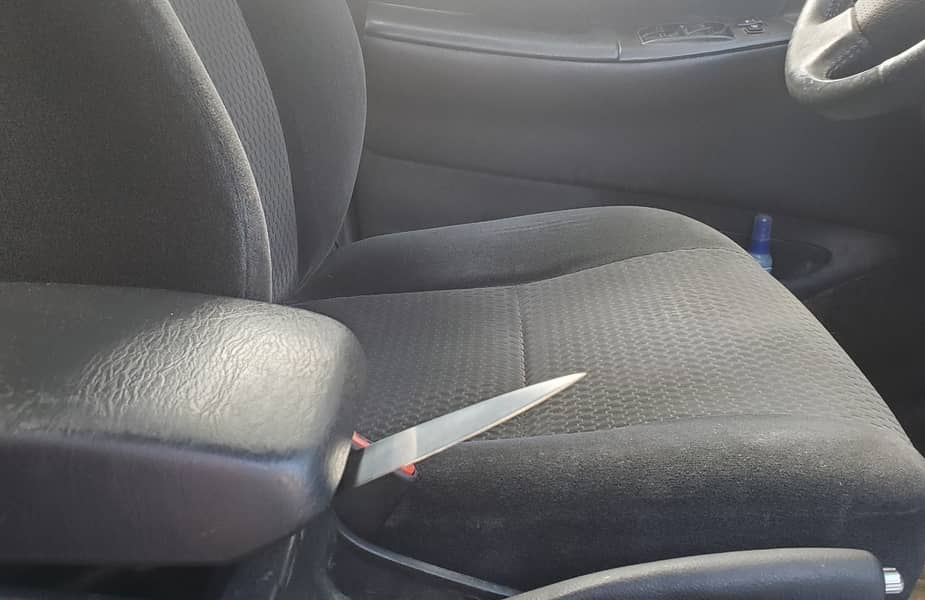 Whether wanting to carry a knife for hunting or self-defense, it is good to know your local laws before just throwing it in the glove box. As you probably expect, some areas are much more restrictive than others. However, there is a general rule of thumb to follow as long as you have a bit of important information.

You can legally carry a knife in your car as long as it is below the length limit set by the state. This will range anywhere from 2.5″ up to 12″ for fixed blade knives. Some states also have no length limit. Be sure to check your local laws as they can vary widely from region to region.

Here are the fixed blade knife length limits of US states:

Now, let’s go into greater detail on a few more questions you might have. That way, you are well-informed on how to proceed when deciding whether to keep a knife in your car or not.

Is It Illegal to Have a Knife in Your Car?

Unlike most countries, the legislation in the United States is kind of a pain in the butt when it comes to clarity. Even though there are existing federal laws, laws can vary quite a bit across the various states. Carrying a particular knife can be perfectly legal in one state but turn into a criminal offense just from traveling across a state line.

The worst part is that vagueness and confusion tend to rule the day. As of now, the only federal law that mentions knives explicitly is the Federal Switchblade Act of 1958

. However, this really doesn’t help clarify anything since the vast majority of people don’t have any desire to carry those sketchy things anyway. However, according to the same law, it is not illegal to possess any of the other types of knives. Therefore, it’s up to the states.

For instance, in New York

, anything that can be remotely considered a weapon could get you in trouble with the authorities. Just be ready to justify the knife you are carrying from another state as merely a tool you use for hunting or some other activity.

As per most laws, putting weapons in your car, whether firearms or knives, classifies them as concealed. Therefore, some states require you to have a concealed weapon permit. Most states, however, do not require this and instead rely on length. As previously stated, the limit varies from state to state.

Tip: As a general rule of thumb, if a state has loose restrictions with regards to open or concealed carry of a gun, then you can pretty much guess that their knife laws will also be more lax as well. Of course, this also means that states with strict gun laws are also more likely to be less forgiving when it comes to knives.

Since not all knives are made the same, you should expect that there will be different restrictions for the various types as well. Once again, these restrictions vary from state to state.

Generally, you can carry utility knives, swiss army knives, multi-tools that have a knife, or any knife that is shorter than 2.5 inches almost anywhere in the United States. Even so, concealing it in your car or your person is a different story and might require you to have the necessary permits.

Important: Just because you are allowed to possess these knives, it does not mean that you can just openly carry them anywhere. It is almost always illegal to bring a knife with you to places such as schools, government buildings, or courthouses.

On the other hand, and confusing as all get out, is that just because a knife goes beyond the state’s legal length limit, you won’t necessarily get in trouble by openly carrying it. As a guideline, if your knife comes with a sheath, then it is already understood that it can be carried openly on your person whenever you want to go out with it.

I realize that this is annoying. I am also somewhat baffled by the lack of clarity in the law regarding knives.

Quick Tip: Your best bet is to probably just call your local sheriff’s office and get guidance from them. Make sure you take note of the name of the person who gives you the info and even record the phone conversation (assuming it’s legal). That way, you can refer back to it if you ever do get into trouble.

Can I Keep a Bowie Knife in My Car?

It is not technically legal to keep a bowie knife in your car since the length usually goes beyond the limit of most state laws. However, depending on your state laws on what constitutes a concealed carry, you might be allowed to carry it in your car as long as you put it in plain view.

Once again, just to be safe, contact your local authorities about survival knives first.

Where Should I Store a Knife in My Car?

The best places to store a knife in your car is in the center console, a door trim panel console, or an easily reachable spot between the seats. This assumes you are keeping it for self-defense and that your state laws indicate that your knife is part of your concealed carry permit.

The main theme of this article is to make sure you are well-informed as to the state laws for everywhere you travel. Typically, hunters will have no problems whatsoever, while those that keep a knife for self-defense will need to be more vigilant in how and where they store their blades.

I know I sound like I am beating a dead horse, but seriously, go ahead and call your local sheriff’s office. They are usually really helpful and courteous. Remember, many of those guys (and ladies) carry personal weapons outside of work, so they may actually be excited to talk to you about the subject.

Disclaimer: The information provided in this article was obtained through extensive internet research. Be sure to check your current state laws

as they may have changed since the time of this writing.