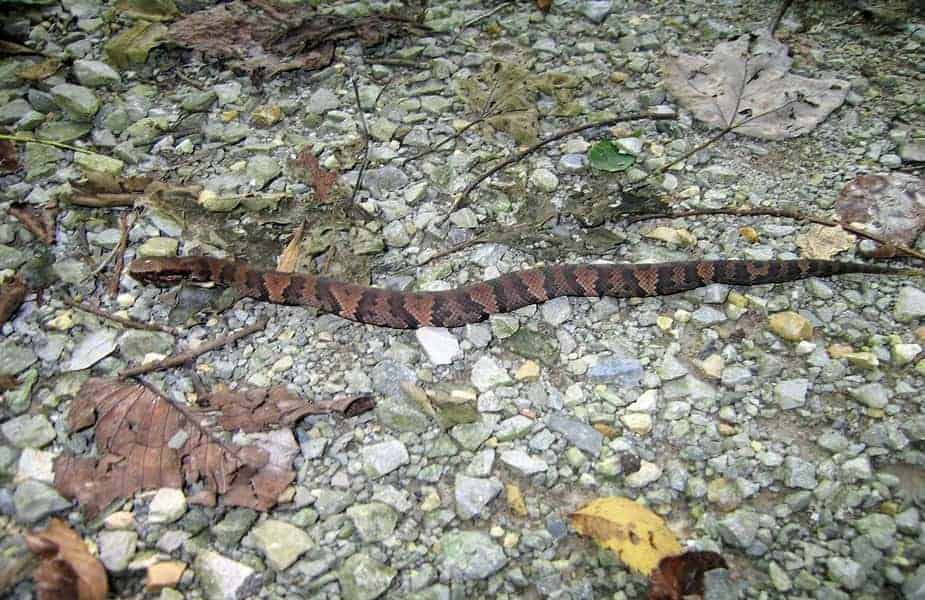 Even though the venomous cottonmouth, or water moccasin, rarely kill humans, it is important to be able to tell them apart from other harmless snakes that live in North America. The good news is that baby cottonmouth snakes have a distinct appearance and anatomical structure so picking them out isn’t that hard once you know what to look for.

Baby cottonmouth (water moccasin) snakes are typically about 8 inches long (20 cm) and tan in color, which is much different than adults who are black. They usually have 10-15 reddish-brown bands, often with darker spots within the bands. A distinctive feature is the yellow or greenish tail end.

Here is a short video of a baby cottonmouth:

Some people mistake water moccasins for copperheads. While they both have a yellow tail, the copperhead will have a grayer appearance, hourglass splotches (not bands) on their body, and often 2 small dark spots on their heads.

Baby cottonmouths also look somewhat different from their adult counterparts. Let’s go through the various features one by one.

One good way to identify a baby cottonmouth or water moccasin snake is to look at the reptile’s body color. Young ones are about 20 cm long when born, and their entire bodies appear tan.

As these snakes grow to about 2-4 feet long, their color changes. Adult cottonmouth snakes look dark brown or black in color.

Baby cottonmouth snakes often get confused with worms and other snake species because of their coloring. Some snakes confused for water moccasin snakes are the Graham’s Crayfish, Western Mud, Copperhead, or Eastern Hognose.

A distinct feature of the baby cottonmouth snake is the pattern that can be found on the back and the sides of this tan snake. On the back of these baby snakes are 10-15 dark bands. These bands are usually reddish-brown; however, darker spots can appear in band sections. The keeled or ridged scales on the back of these snakes make their bands more prominent.

As cottonmouth snakes get older, their skin darkens. This makes seeing their band marking more difficult, if not impossible, as they age.

Side and Belly of Baby Cottonmouths

The banded pattern with the tan base continues along the side of the baby cottonmouth snake. The belly differs from the pattern found on the back and the sides.

Cottonmouth snakes have a light cream-colored belly. This lighter colored belly has been decorated with brown-yellow splotches giving the snake a unique appearance.

One of the most prominent features of the water moccasin snake is its unique tail color. Newly born cottonmouth snakes have yellow tails. They use this yellow color to attract their prey when young as they are left to fend for themselves after birth.

As they head into adolescents, their tail changes from yellow to a green hue. Eventually, the water moccasin’s tail will turn black. The black tail is a clear indication that the cottonmouth snake has reached adulthood.

The water moccasin snake’s tail seems too little for its body. The body appears to abruptly narrow and form the tail. It does not gradually taper off as most snake tails do.

You can find a few different hues present on the head of the cottonmouth snake. The young water moccasin snake has two dark stripes by its nostrils. The snake’s snout appears paler than the rest of its block-like head.

On the head, you will notice that the chin appears darker. The darker chin is one way to distinguish the baby cottonmouth from a baby copperhead snake.

When observing the baby cottonmouth snake from above, their head looks triangular; however, it can be difficult to distinguish these snakes by head shape. Some species of non-venomous snakes can flatten their heads when confronted with danger. This can lead people to misidentify the water moccasin snake when out in the wild.

Another primary way to identify this snake from others is to look at the head and the neck. Cottonmouth snakes have a distinct head and neck. The neck is narrower than the head. Not many snakes have this attribute. Also, the edge of the snake’s face is unique and appears to be more square than round.

The elliptically shaped eyes of the baby cottonmouth snake are mesmerizing. The eyes appear like slits on the side of the face. The lower part of the eyes have a dark line running through them.

If you study the face of this snake, you will see pits between their cat-like eyes and nostrils. This pit is a clear way to delineate the baby cottonmouth from other snake species.

The pit is actually an organ sensitive to heat. Through this organ, venomous snakes are able to find warm-blooded prey to feed on.

A baby cottonmouth snake has a white to pink mouth. When this snake is threatened, it opens its mouth wide to scare off attackers instead of outright attacking. This behavior is unique to the cottonmouth snake.

This warning mechanism may be the reason that these seemingly aggressive snakes rarely bite humans. The water moccasin snake endeavors to warn its predators but will attack if provoked. If you come across a snake with an open mouth, take it as a warning and back away immediately.

In addition to opening its mouth, this snake species will give off a musky scent while shaking its tail to warn off predators.

When the water moccasin snake’s mouth is open, you can see its fangs. These fangs are curve-shaped and hollow. The snake injects its venom subcutaneously. It can take a few minutes to a few hours to see the results of a venomous snake bite. Symptoms can include severe pain, swelling, and difficulty breathing.

One way to rule out whether you have come in contact with a cottonmouth snake is location. The venomous water moccasin snake resides in the southeastern part of the United States. You can find the baby cottonmouth snake in 15 states; including, Florida, Mississippi, and Texas.

The water moccasin snake enjoys living close to ponds, swamps, and marshes. They can even reside in streams and drainage ditches. It is uncommon for this type of snake to be found outside of these areas, but it occasionally happens.

What Type of Venom Does a Cottonmouth Have?

The type of venom found in cottonmouths falls under the hemotoxin category, which affects the circulatory system by inhibiting blood clotting through the destruction of red blood cells. This can cause harm to tissues and even permanent scarring or even require amputation if left untreated.

Keeping Cottonmouths Off Your Property

Now that you know how to identify a baby copperhead, you may want to take preventative measures to keep them away from your family. While no measures are 100% foolproof, spreading snake repellant along the perimeter of your property is very inexpensive. I put this stuff out from time to time, especially after I spot a snake.

I recommend this brand, found on Amazon. It has a better smell than many other options out there and seems to stick around longer.

Baby cottonmouths or water moccasins have distinct characteristics that make their identification straightforward. I hope this article has made it easy for you to identify that snake that has crept up onto your property. Hopefully, it’s not a cottonmouth or another poisonous variety and is a garter snake instead!

If you encounter snakes often or are planning a trip outdoors, here are a few products you may be interested in that I recommend.