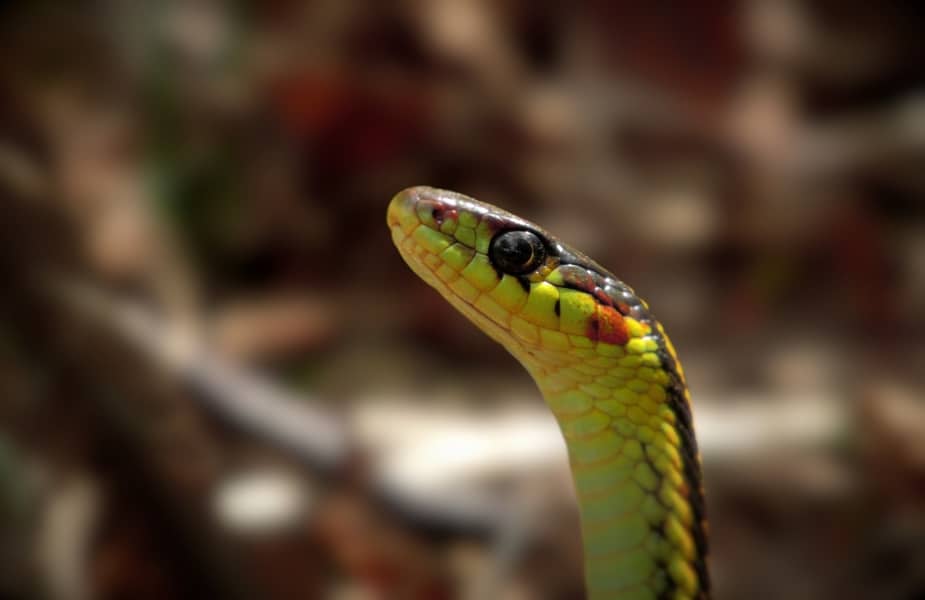 I was doing some gardening recently and got quite a shock when a snake slithered out of nowhere and almost right across my hand. I thought it might be a garter snake but wasn’t sure. So I did some in-depth research, and this is what I learned.

Garter snakes come in a variety of colors, and adults average about 24 in (60 cm) in length. They usually have darker heads than their bodies and typically have three distinctive stripes along the length of their body. These stripes are generally yellow and green, but some color variation does exist.

Here are some examples of what they look like:

Let’s dive a bit further into the details.

A good example of a colorful garter snake is the Red-sided Garter Snake. The base of this snake’s body is usually green or black. It has three distinctive stripes across its body in yellow. The dorsal stripe appears on the second or third scale row. The lateral stripes surround it.

Between the yellow stripes on the Red-sided Garter Snake, you can see red and orange bars. The darker color of this snake’s body appears between the bars. Some individual snakes will display vibrant red bars while others will depict muted or barely visible bars.

Another regional variation is the Western Garter snake has a big head with a distinct neck.

Most garden snakes have some color dispersed in between their stripes. This pattern has been described as splotchy or checkered. This splotchy appearance in between a garter snake’s stripes is a distinctive feature when compared to other species.

However, there is a small population of garter snakes that do not present with any stripes down their back. Often these snakes usually appear dark in complexion.

Garden snakes can vary in size as well. Most are small, but some grow larger. Most garter snakes measure about 58 -76 cm in length; however, some reach 1.5 meters in length.

Garden snakes are not dangerous even though they can be venomous. Many species generate small amounts of the neurotoxin venom in their saliva.

The toxin’s mild nature ensures that garden snakes cannot kill or cause illness in human beings. Also, these snakes lack an efficient means to deliver venom to their prey. Hence, garden snakes are not considered poisonous.

There is a rare exception, however. Garter snakes can become poisonous by feeding on toxic newts. The toxins from newts can accumulate in a garden snake’s liver for up to three weeks, making them poisonous for a specific interval of time.

The only time a garden snake will try to attack a human being is in self-defense. Snake bites ordinarily happen when a person picks them up to take a closer look at it, and the snake reacts in fear. These bites can cause swelling and itching and need to be cleaned like any other wound. Even so, the bites are relatively harmless (unless the snake that bites you has recently consumed a toxic newt).

Before the early 2000’s garden snakes were thought to be non-venomous. Because of this mistake, many people still believe they do not produce venom. This misconception continues because people often associate a snake producing poison with a snake being deadly or poisonous.

While garter snakes are harmless to humans, they are not harmless to insects and smaller rodents. These snakes can use their venom to stun mice and toads so that they can swallow them easier.

Keeping Snakes Off Your Property

Some people like having snakes around the yard because they eat pests. Other people do not see any benefit to these scaly creatures slithering around their property and would rather they find a new home. Luckily for “snakeiphobes”, it is easy to deter snakes from taking up residence in your yard.

While no measures are completely foolproof, spreading snake repellant along the edge of your property is relatively inexpensive. I sprinkle it around from time to time, especially after encounter something slithering around my yard.

I recommend this brand, found on Amazon. It doesn’t smell nearly as bad as some other options and seems to have better lasting power

One way to encourage snakes to go elsewhere is to make your yard less welcoming. This can be accomplished by mowing regularly since snakes do not like short grass. This is because it makes them easier targets for prey. They are not able to camouflage their bodies as well as they can in tall grass.

Keeping your trees and shrubs trimmed will help deter snakes from living on your property. It is essential that the first branches of your shrubs are six inches away from the ground. Trimming your shrubs provides snakes with fewer locations to hide.

Snakes will be more likely to hide out in your yard if it is over-watered. Over-watering draws creatures snakes enjoy snacking and the abundance of food makes your yard a desirable place to be for anything that slithers.

Another way to make your yard less attractive to snakes is to avoid using large rocks and mulch in your outdoor landscaping design. These items could cause snakes and their prey to set up winter habitats and begin breeding. To keep snakes off your property, it is best to use smaller rocks in your outside entertaining area.

What Do Garden Snakes Eat?

Garden snakes are, like most snakes, carnivorous. They feed predominately on amphibians (including tadpole eggs), fish and earthworms; though, they will eat any creature they can overpower. They like to swallow their prey whole.

What Is the Difference Between a Garden Snake and a Garter Snake?

There is no difference between a garden and a garter snake. They are the same snake. People commonly refer to garter snakes as garden snakes. This is because garter snakes are often found in gardens. Gardens provide these snakes with friendly environmental conditions and good food sources.

While some of us don’t want any snakes around, the good news is that the vast majority are harmless, like the common garden snake. Now you know how to spot them and not have to worry that a poisonous snake is on your property.