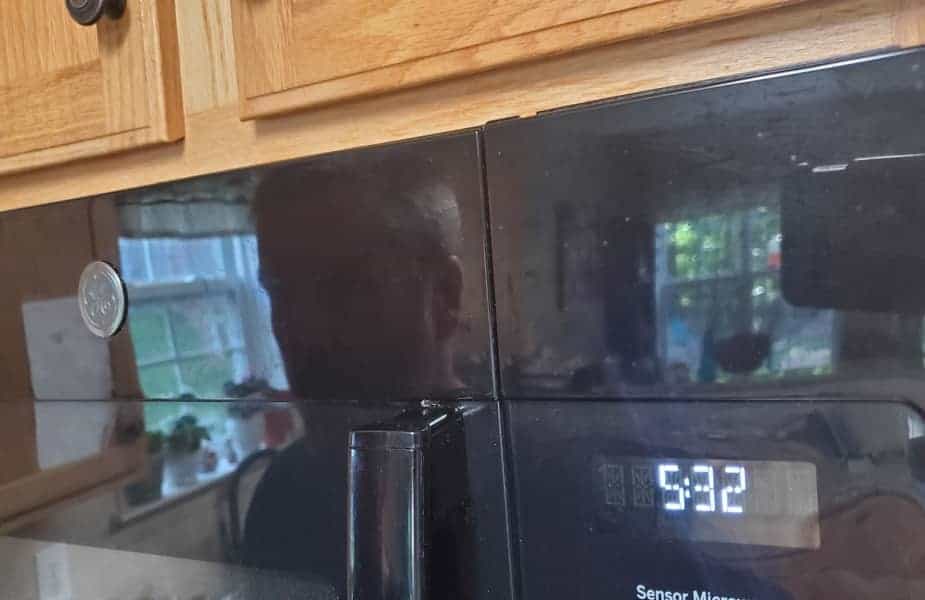 When my kids were young, they stood eagerly next to the microwave, waiting for their popcorn to pop. My friend had seen them doing this and told me they’d ruin their eyesight and never look directly inside it when it was on. Later in life, I was repeatedly told that being near a microwave would cause cancer. I didn’t have a smartphone to check facts back then readily. So, is there a basis for these fears? Are we using a dangerous device each day to warm our leftovers, or are these concerns no more than an old wives’ tale?

It is safe to stand near microwave ovens even though they will leak radiation within a small radius. Standing two inches away makes it insignificant enough not to be life-threatening to humans. This is mainly due to FDA regulations and installed safety features, like a metallic grate in the door lining.

Microwave ovens are a convenient, fast, and cheap way to heat food. They’ve transformed mealtime culture in developed countries, and most homes have one installed. It’s good to know how a microwave oven functions, what kind of radiation they use, and what is the safest way to use them.

How Close Can You Stand To Microwave?

Exposure to radiation has been the forefront of public health since the middle of the last century. Once the effects of atomic bombs were widely known, all forms of radiation came under scrutiny. Whether it was from the sun, an electric pylon, or household appliances, everything was measured, and regulations were introduced to keep the public safe. The microwave oven was included in this evaluation.

The FDA mandates that a microwave oven can only leak five milliwatts of microwave radiation per square centimeter at a distance of two inches throughout its lifetime. To ensure any product on the market meets these standards, the FDA tests microwaves in its own labs at the Center for Devices and Radiological Health. Provided that the appliance is working those these standards, then there is no risk to your health.

Microwave ovens use electromagnetic radiation to heat through dielectric heating. The radiation decreases exponentially with distance. Thus, the radiation dose by standing twenty inches away from a microwave is 100 times less than if you were standing two inches away from it. So, if you are concerned about absorbing too much radiation from your microwave, then take a step backward to decrease the dose you are exposed to exponentially. Note that the FDA does not recommend a minimum safe distance.

Understand Microwaves and Types of Radiation

Modern microwave ovens use 2,450 MHz microwaves, which are a type of electromagnetic radiation, which means waves of electrical and magnetic energy move through space together. Microwaves are part of the electromagnetic spectrum, which is broken down into seven main bands, starting with those of the lowest frequency: radio waves, microwaves, infrared, visible light, ultraviolet, X-rays, and gamma rays.

The lower the frequency, the higher the wavelength, and the lower the energy they possess. Therefore, radio waves have the least energy, while gamma rays have the most energy. The more energy an electromagnetic wave has, the more damage it can do to biological systems.

There are two forms of radiation: ionizing and non-ionizing. Ionizing radiation is the most dangerous type, as it will affect the electrons that surround an atom. What this means is that this type of radiation can literally change the chemical structure of molecules inside your body, including your cells and DNA. This is the type of radiation that is mostly associated with burns and cancers. X-rays and gamma rays fall into this category.

Fortunately, microwaves fall into the safer kind of electromagnetic energy and are classed as non-ionizing radiation. In other words, radiation from microwaves doesn’t change the chemical composition of the molecules of what it passes through. While exposure to too much of any type of radiation is a significant health concern, the kind that microwave ovens use is the less severe form.

Despite extensive investigations into finding a correlative link between microwave ovens and cancer, there has been no link appreciated. To date, cancer organizations worldwide consider using microwaves to be safe.

Why Do We Use Microwaves To Heat Food?

Most modalities of heating food are through the transfer of thermal energy from one surface to another. However, microwaves operate differently. Instead, the non-ionizing radiation causes the bonds in water molecules inside food to vibrate. The vibration produces thermal energy that heats everything around it.

As water molecules are evenly dispersed in food, the heating, too, is uniform. The higher the water content of the food, the faster it will heat. They are an incredibly efficient way to cook food because the microwave heats only the food, not the entire oven. Comparatively, a conventional oven wastes energy to heat compartment as the whole, not just the food inside.

Microwaves are suitable for heating food because they have three essential characteristics.

The microwave can penetrate to around 1 centimeter into food before it is completely absorbed. The rest of the food gets heated through convection as heat travels from the exterior of the food into the middle. That’s why thinner food needs far less cooking time than a thicker food, like a baked potato.

Keep in mind that hot dishes aren’t being warmed by the microwaves but from the food inside it. Microwave safe products are those that can tolerate the temperatures of microwaved food without melting or causing burns to the user.

While microwave ovens use a form of energy that emits radiation, it is perfectly safe to stand close to it during operation. The FDA is only concerned with the radiation that can be measured two inches from the oven door’s surface. Therefore, if you stand at least that far away, you will not receive a dangerous dose.

Microwaves cook food efficiently by causing water molecules to vibrate, which causes the food to heat up via thermal energy. The higher the water content it has, and the thinner your food is, the faster it will cook.

Why Can You Not Put Metal In A Microwave?

Despite such a hazard, sometimes, you will see some metals graded as microwaveable. That is possible if it is a smooth metal with no points. In this configuration, the metal cannot create an arc. Metal is also inadvisable in a microwave because it reflects microwaves. As a result, the food inside will not heat evenly.

Do Microwaves Destroy Nutrients in Food?

It is widely perceived that microwaving food decreases its nutrient content. Studies on this matter have been inconclusive. One investigation determined that the microwave removed the vitamin C from broccoli while retaining all of its minerals. While that may appear alarming, it failed to note that vitamin C is easily degraded when exposed to heat, and it is lost whether the broccoli is microwaved, fried, boiled, or roasted.

On the plus side, other studies have demonstrated that microwaved food retains the highest amount of antioxidants compared to other cooking methods. The same trend was seen with omega 3 fats when seabass was prepared. Overall, no scientific evidence has concluded that there are negative nutritional consequences to microwaving food.

Is Looking Into a Microwave Dangerous?

Two areas of the body are particularly prone to damage from microwave radiation: the eyes and the testes. Both have very little blood flow, which means the body has no way to disperse heat form those areas. The lens of the eye is primarily affected by heat, and damage from microwaves can cause cataracts.

However, these warnings are only applicable to large doses of microwave radiation. You would need to stand next to a microwave oven for an extended period of time for enough microwaves to leak and heat your eyeball to cause such damage. Overall, stay two inches away from the microwave when it is on, and you’ll be safe.