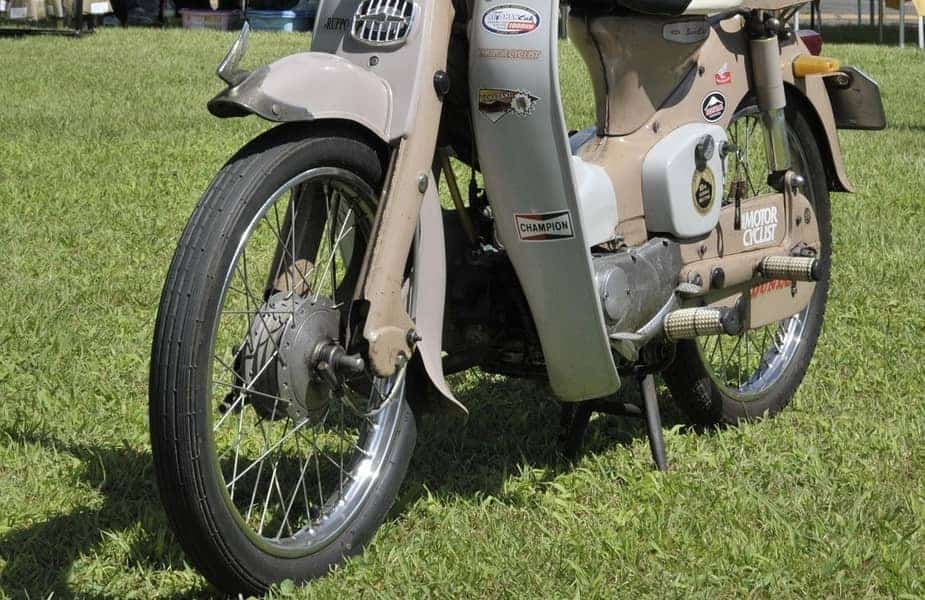 When you think of motorcycles, several words may come to mind. Power, freedom, attitude, speed, and awe-inspiring designs are but a few that might pop into your head. It’s no wonder that motorcycles have exhilarated consumers for over a century.

Indeed, two-tire transportation has never been just a means of getting around but rather a mechanical interpretation of individuality. However, with thousands of motorcycles produced over the years, it can be a hassle choosing the one that contains an ideal combination of indisputable design and impeccable engineering. Therefore, you may just want to select the most popular bike of all time.

The bestselling motorcycle of all time is the Honda Super Cub, with over a hundred million motorcycles sold to date. The scooter-like model had one of the best marketing campaigns in history and is advertised as perfect for busy streets in large towns due to its compact size, practicality, and impeccable functionality.

The rest of this article will go into detail and tell you everything you need to know about this iconic bike.

What Is a Honda Super Cub?

The idea of Honda’s Supercub was born when the president of Honda decided to travel across Europe to collect data and inspiration for his next model. The trip showed him that the public preferred scooters and bikes since they made it easier to maneuver around traffic and busy roads.

The company eventually decided that three key features were necessary. The new model needed to be:

The idea for the Super Cub was born. And, if I had to sum up the bike in 10 seconds I would say…

A Honda Super Cub is the best-selling motorcycle of all time. It is a scooter-like bike that is compact, easy to operate by all, and fuel-efficient. These characteristics set the model apart from other motorcycles and significantly influenced all modern motorbikes.

It didn’t take long for it to become the most popular bike in history. In fact, the Super Cub had the longest and most successful marketing campaigns of all time that lasted for twelve years.

Why the Super Cub Was (And Is) So Popular

The reasons for such success are that 60 years ago, the public did not consider motorcycles a suitable means of transportation for daily use. Marketing motorcycles to females was pretty much unheard of. But the biggest inhibitor was that most consumers could not afford the models that were on the market.

Additionally, they weren’t a comfortable transportation method due to the large sizes of old motorcycle models. Ultimately, the new Super Cub provided all of the advantages that other motorcycles couldn’t at that time. The brand introduced the Honda Super Cub as a people’s bike.

It was suitable for all, unlike the expensive and loud cruisers and racers commonly associated with motorcycles. The mini-moto motorcycle had a steel-based chassis with a horizontally-placed engine at its spine. Due to the never done before engine placement, it had better airflow and more balanced weight distribution.

The motor allowed the motorcycle to run even at low-quality fuel and made the Supercub more affordable for the public. The 17-inch wheels made it nothing like scooters, while the comfortable seats, round-shaped headlight, and a hidden fuel tank under the hinged seat made the model unique and desirable for the everyday commute.

However, the main feature of the bike that stood out was the clutchless three-speed transmission. Every other motorcycle at that time had a clutch. So, the absence of it was a big deal. It made operating easy and comfortable for people of all sizes, genders, and ages.

Hence, the popularity has reached skyrocketing numbers, leaving its mark in the US, Japan, Vietnam, UK, and many other countries.

Where Is Honda Super Cub Made?

Honda manufactures Super Cubs in 15 countries, including Japan, China, and the United States, and sells them in more than 160 countries. The first Super Cub model was made in a factory in Suzuka city, located in Mie Prefecture, Japan. A few years later, Honda opened a United States factory to produce the next model of Super Cub.

The newest models of Honda Super Cub have the top speed go up to 60mph. However, to reach that speed, you have to have a petite figure and have no load. Otherwise, for most commuters, the highest pace will be 50mph.

The Super Cub’s engine has a compression ratio of 9.3-1 with a long-stroke plant running roughly a 52.4mm bore with a 57.9mm stroke. These are the typical engine characteristics for the Honda’s Super Cub, while other additive features vary in different models.

How Much Is a Honda Super Cub?

The Super Cubs are more affordable for everyday commuters due to their price and the low-quality fuel that they run on. The newest 2020 Honda Super Cub C125 costs around $3,649, which is relatively low compared to the roaring cruisers and racers.

In 1958, the first Honda models cost around $295 in the United States and 55,000 yen in Japan. In Japan, it was still too expensive of a price, and that’s why only a minority of consumers owned Honda Super Cub. As for American commuters, this price was relatively low and inexpensive.

The other motorcycle brands don’t even come close to the number of Honda Super Cub units sold during their 60s marketing campaign. However, some of the best-selling motorcycle names include Yamaha, Suzuki, and, of course, Harley-Davidson.

Yamaha is a well-known Japanese manufacturer of motorcycles and other vehicles. The brand started selling its motorcycles in the US in 1958 with the help of Cooper Motors. A few years later, the brand became so popular that they no longer needed aid to sell and produce their motorcycles on the American market.

Suzuki is yet another in-demand Japanese manufacturer and one that produces best-selling motorcycles in the world. Their T20 Super Six model was a blast back in the 60s and brought them international fame. Today, it is impossible to imagine the motorcycle industry without the famous Suzuki motorcycles.

Last but certainly not least, the impact of Harley Davidson cannot be over-stated. In fact, every conversation about motorcycles contains at least a mention of the iconic Harley-Davidson bikes. Their motorcycles are expensive, but the high quality is worth it.

Every biker’s dream is Harley due to their wild attitude and impeccable design. They produced many models that left a historical imprint on the American culture and influenced the modern motorcycle in many ways.