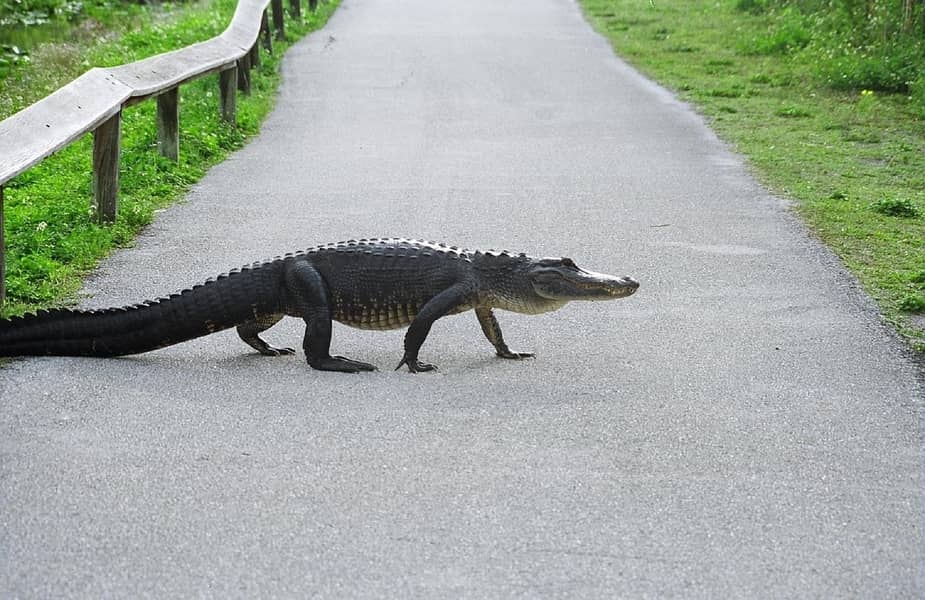 Alligators are intimidating and dangerous reptiles. If you live in a place where they are common, such as the state of Florida, then you may need a way to protect yourself from them. Since humans have been encroaching into their territory, they are becoming more and more common around humans and have begun to lose their fear of humans, which is bad news for us.

Will a taser stop and alligator? No, an alligator’s hide it too thick to be affected by a taser. The only possible way for an alligator to be stopped by a taser would be to hit it in the mouth, which is both dangerous and untested. It is better to try to avoid contact with an alligator altogether.

While it is an interesting theory, tasing an alligator is, in actuality, very dangerous to even attempt. More of a thought experiment that something that should be put to the test, even many police officers believe that to even attempt to tase an alligator would be a very bad idea.

Why Won’t a Taser Work on an Alligator?

The main issue with trying to tase an alligator is the gator’s thick hide. Alligators are designed this way by nature so that they can defend themselves against other predators, which may include other alligators.

Additionally, you would need to be dangerously close to an alligator in order to taser it as most tasers only reach distances of 10 to 15 feet. Police grade tasers can reach longer distances, but most of us do not have access to this kind of weapon.

What about Alligator Clips?

Tasers use something called an alligator clip, a name that may lead those unfamiliar with tasers to believe that they work on alligators. This, of course, is not the case. The alligator clips on a taser are not sharp enough to pierce the tough hide on an alligator.

The alligator clip simply describes the mechanism, which works like the mouth of an alligator to attach itself to the target.

If you have ever been to a location where alligators live, all you have to do is ask a native how to avoid getting eaten and you better be prepared for a long conversation as everyone has their theories, tips, tricks, and advice for the tourists. Some of it is based in fact, some of it is just to mess with the tourists, so I thought I would share some real ways to avoid them.

It may seem like a good idea to go on an alligator sightseeing tour and they are marvelous creatures, don’t get me wrong, but there are a few rules you may want to abide if you plan to site see for alligators.

There are actually only two ways for someone to avoid getting eaten by an alligator: avoidance or escape.

The best sure-fire way to keep from getting eaten by an alligator is to avoid them altogether. Try to avoid places where they hang out, like swamps, any time of day. You will also want to try to avoid any source of water at night because you will not see them as easily at night as you would in bright light, and they can use this to their advantage.

If you do see an alligator, head in the other direction. You may have stumbled upon a gator nest, and females can be exceedingly protective of their nests. The sooner you can get out of its territory, the better.

Don’t give them anything that they would eat. Don’t throw fish out of the boat and don’t try to hand feed an alligator. You may pull back a bloody stump. By even throwing fish out to them, they will associate humans with a free meal, just as those in captivity do. While at the zoo or alligator park this is fine, but in the wild, this could be putting more than your life at risk.

If an alligator starts to associate humans with free meals, they will start to lose their fear of humans and this can spell danger for humans around where the gator lives. Between seeking humans out for free food and losing their fear of them, this easily puts pets and young children at a high risk of being attacked.

Stay away from water from dusk till dawn, this is when they are hunting. There is also less chance you will be able to see them if they are nearby. They blend into the darkness so well they could be on you before you even realize it. This is especially important if you are walking pets at night. While it may seem like a nice walk, pets can make for an easy gator meal.

Pay attention to the warning signs. This can include things like hissing, growling, snapping or advancing with their mouth open. If you see an alligator, back away from them. If they show any signs of aggression, turn and run. Alligators will not chase for a long distance. Usually, if you can get more than 20 feet away from them, you are at a decreased risk of attack.

Be especially cautious March to July. This is alligator breeding season and the testosterone-driven males will be considerably more aggressive. They may not give the usual warning and may just attack before you even realize they are there. Males become overly aggressive during the breeding season and may be more willing to chase and fight than normal.

Be aware of nests. Females can be very protective of a nest and getting caught near one may cost you your life. DO NOT under any circumstances, touch anything within the nest if you find it unguarded. The female could still be close, even if she has not shown signs that she is. Touching the eggs could get you killed.

Drive around alligators in the road. There have been too many incidents of people being attacked by alligators that were just trying to cross a road. It is best to just leave them be and drive around them. Alligators, especially injured ones, can be dangerous.

If you see an alligator coming at you, run! Alligators do not like to chase their prey. They may be fast in the water, but they can’t keep it up for long, especially on land. And to bust a bit of a myth, the zig zag pattern means nothing other than giving the alligator less distance to cross to get you. It does not confuse them in the least bit.

Run in a straight line as fast as you can in the opposite direction of the alligator. An alligator won’t chase you more than a block because it just does not have the endurance for that. They want easy prey, if they can find it, and a running human is not easy prey.

If you get caught by surprise and it latches on to you, it will attempt to drag you into the water. Most of their prey cannot survive without air for very long, and they know this, so they will attempt to drown you. The best thing you can do at this point is put up a fight like your life depends on it because it does!

Scream, make a racket, hit it, aiming for the snout and the eyes, the two most sensitive parts of the alligator. Whatever you do, keep fighting. This falls under the alligator wanting easy prey philosophy. If you put up enough of a fight, it just might let you go because you are too much trouble to bother with. It can find an easier meal elsewhere.

What Happens to an Alligator That Gets Shocked?

There are no publically available resources showing anyone who has tried to tase an alligator, but gators have been recorded attacking an electric eel which is about as close as we can get.

Check out this video below to see what happens when a gator gets electrocuted. It took almost many moments for the electrocution to totally paralyze the gator and since tasers only last between 5 and 30 seconds depending on the model I certainly won’t be taking any chances aiming a taser into the mouth of a gator anytime soon.

Is alligator skin bulletproof? Alligators and crocodiles have tough skin but are far from bulletproof. Bullets do get penetration into the gator’s skin and can kill these animals.

What animals can kill an alligator? Big cats such as jaguars and leopards can hunt adult alligators and crocodiles. Large snakes such as anacondas and pythons have also been known to attack and consume adult crocodiles and alligators.