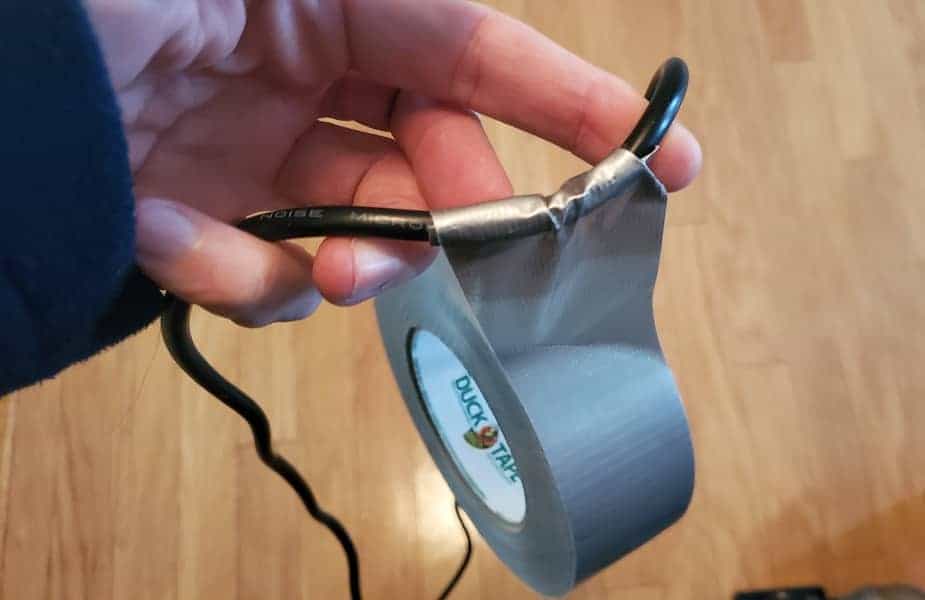 Recently, I was trying to repair two wires in a computer and realized I was out of electrical tape. All I could find that looked like it might do the job was duct tape. Before trying it, I did some extensive research to see if it would be okay, and this is what I learned.

Duct tape should not be used instead of electrical tape since it lacks the specific requirements needed to deal with the flow of electricity safely. Not only does duct tape not wrap snugly enough around wires, but it also has cloth fibers in its backing, which can potentially be a fire hazard.

Now, let’s take a closer look at the topic and cover some common questions. I’ll also provide a couple of other good options that can be used for wire repair instead of electrical tape.

Why Duct Tape Can’t Be Used as Electrical Tape

You may be shocked to learn that duct tape, despite its multiple functions, cannot fix everything. One of the few things it can’t do well is insulate wires.

Duct tape uses cloth fibers in its backing, which, when placed up against electrically charged wires, can dry out over time and possibly even conflagrate; especially, when they carry high voltages of electricity. To prevent this possibility, you need to use electrical tape.

Electrical fires are not the only reason you should not use duct tape around electrical wires. Its cloth backing also does not have the flexibility to wrap snugly around a wire like electrical tape can.

This characteristic is known as elongation. Electrical tape’s ability to stretch allows it to conform to the wire it’s being wrapped around. This makes electrical tape the preferred method of wire insulation. It also has the thermal capacity to deal with high volts of electricity. Duct tape is not rated to do this.

What Exactly Is Electrical Insulation Tape?

Electrical insulation tape works to cover wires that conduct electricity from one place to another. Electrical tape is made mostly from vinyl because of its elongating characteristic and features a pressure-sensitive backing. Different types of plastics can be used to develop electrical tape.

Most electrical tape is black, but not all. Electrical tape can be black, red, blue, brown, orange, green, green with a yellow stripe, white, or grey. Usually, each color represents a different task and lets the technician know the purpose.

Make Sure Your Electrical Tape Is UL Listed

Most electrical tapes have been UL listed, which means they are tested for performance and quality. Some of the tests examine how well the tape holds up in cold and warm temperatures, while some evaluate the tape’s ability to handle moisture.

In addition to the test mentioned above, UL listed electrical tapes undergo examinations on their physical properties. Tests evaluate adhesive strength, backing strength, and a tape’s ability to elongate. Many high standards must be met for an electrical tape to receive a UL listing.

Leave Major Jobs to the Pros

Homeowners without training insulation tape should only use electrical tape on small home projects. You can use black electrical tape to repair small cables or even attach two separate ones together. However, it would be best if you did not use it to conduct extensive electrical repairs.

Cables or wires with an abundance of damage should not be repaired by novices. Definitely avoid using electrical tape to make long-term connections in junction boxes and light switches. These jobs should always be hired out to trained professionals.

What Can Be Used Instead of Electrical Tape?

There are a few alternatives to electrical tape. Two of these alternatives include wire nuts and heat shrink connector tubes.

Can I Use Masking Tape Instead of Electrical Tape?

You cannot use masking tape instead of electrical tape since it is not rated to do this type of job. Not only is masking tape potentially flammable, but you could also even receive a shock through it. Only UL listed electrical tape should be used to connect anything that conducts electricity.

Can You Use Scotch Tape on Electrical Wires?

You should not use scotch tape on electrical wires. It has no electrical insulation properties or flexibility and could potentially cause a fire. Therefore, it would be unsafe to use. Only UL listed electrical tape should be used to connect anything that conducts electricity.

Electrical tape can catch on fire if the tape gets extremely hot. However, most electrical tape has good thermal properties and is generally rated to function up to 176° F (80° C). Applying the tape correctly in the right environment reduces the risk of combustion.

Now you know only electrical tape, wire nuts, or shrink tubing should be used for electrical jobs. Before you start an electrical repair, it is important to make sure you are using the right electrical tape for the job. Make sure it is UL listed and get professional help if unsure. Here is a good YouTube guide.