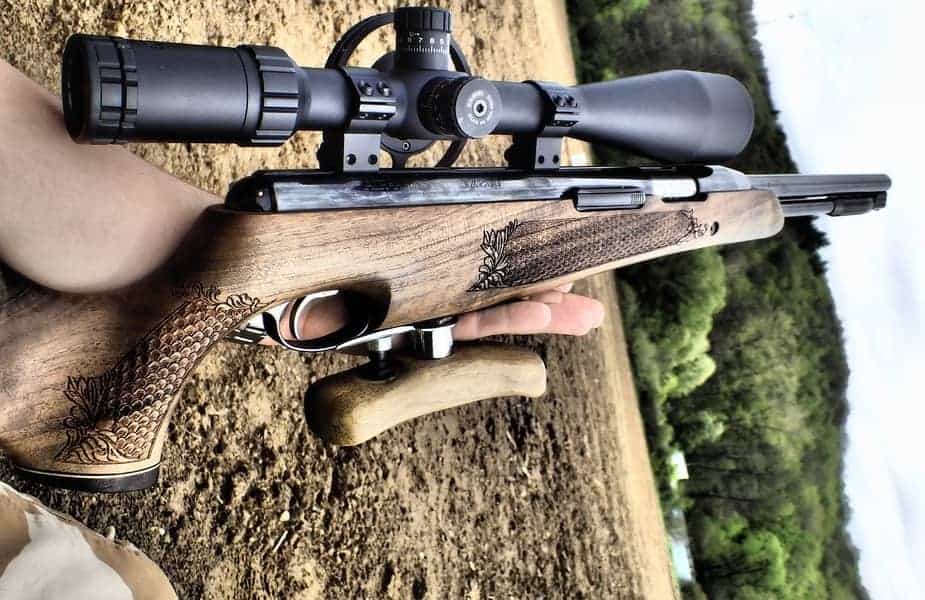 Knowing the weight of your pistol or rifle is essential. It informs you of the physical exertion to expect based on your physical strength, how stable they will be, and recoil management when shooting. Needless to say, all guns do not weigh the same and their intended use is different.

How Much Does a Rifle Weigh?

On average, a completely scoped and loaded rifle will weigh 6-7 pounds. Hunters consider this weight fairly optimal, given that the more weighty a rifle is, the more it feels well anchored, helps you stay on target, and the lesser the recoil when shooting at close and longer ranges.

How Much Does a Pistol Weigh?

On average, the weight of most popular pistols or handguns comes out to 1.5 pounds when loaded and 1.1 pounds when unloaded. The weight overall depends on the type, size, caliber, and how many bullets it holds.

Other skilled shooters might argue that a 15 to 17-pound rifle is ideal due to the less felt recoil and intuitive accuracy. The next section explains how weight difference matters and the role it plays in the different firearms, including rifles, guns, and pistols. Read on to find out.

How Heavy Is the Average Rifle?

One thing to note is that the weight of a rifle is subject to change depending on how customizable it is. For instance, if you had an AR-15 rifle that is popular for being customizable and versatile, you might notice an overall change in its weight if you added or removed some of its parts.

You can have it weigh as less as 4 pounds or add accessories to it till it weighs as much as 10 pounds.

Another factor is weight in terms of balance. If you added accessories to the front or rear of your rifle intending to shift its balance, needless to say, this change would also affect the rifle’s overall weight.

Experts recommend that you don’t forget to balance weight with capabilities as you customize your rifle.

Once you find a middle ground between your comfort and your rifle’s capability, you are most likely to use it effectively.

Essentially, the weight of a rifle helps to increase support as you hold the gun, intuitive accuracy as you target, and the kick you get after shooting.

However, it is also important to consider the purpose. For instance, if you wanted a firearm for hunting on long walking distances or mountain terrains, you would probably have to rethink carrying a weighty firearm than say if you were getting one for hunting in open terrains or spotlighting.

Similarly, getting a firearm for target practice at the ranch will tax you less on weight considerations, unlike getting one for rigorous hunting.

Ultimately, since you cannot focus on one area without losing out on others, a good practice is to always balance comfort with capabilities.

Now if you are considering a lighter option such as a gun, let’s find out how it would weigh on average and how this weight affects performance.

How Much Does a 22 Rifle Weigh?

Established as the most common rifle in the world today, the 22 rifle is a sportsmanship firearm with almost unparalleled popularity for its less recoil action, noise or muzzle flash. It comes in several actions, including pump action, bolt action, lever action, and semi-automatic.

The 22 rifle weighs 3kg (approximately 6 pounds) and when it comes to ammo can hold a 10 round magazine. It is particularly ideal for beginners since it doesn’t have an intimidating design nor sound. Its less recoil can also help you refine your shooting faster.

Hence, if you consider the 22 rifle for hunting, sports, or target shooting, get ready to love it for its lightness even when fully loaded, a remarkable utility and ease to fire in both standing and prone positions.

Aside from being the rifle of choice when hunting small game like squirrels and deers, the bolt action 22 rifle is also used in the Olympic winter games, Biathlon and by the Boy Scouts of America – according to Gear patrol.

How Much Does a Sniper Rifle Weigh?

A sniper rifle is generally known as a bolt and action weapon used mostly when shooting longer ranges and great distances. It is usually equipped with a telescope for optic capability and accuracy. It is a bipod for stability/resting the rifle on the ground, a stock which counters muzzle sending recoil into the shooter’s body and other accessories.

Due to gear, the long barrel and accessories fitted on the sniper rifle, it can get heavier to weigh up to 28.5 pounds which is almost 13kgs. A sniper rifle’s weight is subject to change depending on the scope, barrel length, and accessories, all of which add to its overall weight.

How Much Does a Pistol Weigh?

Pistols come in the form of semi-automatic handguns, derringers, or single shots – which are manually loaded after each shot.

Depending on the type, size, and caliber, a pistol can weigh differently and carry up to 18 bullets.

Unlike on a revolver where the chamber is not permanently integrated, a pistol comes with a permanently aligned chamber. A short stock is designed to be gri[[ed by one hand at angle to and extending below the line of the bore. This is actually what differentiates a pistol from a revolver.

Popular examples of pistols include M&P, the Glock and SIG Sauer P320.

Based on the caliber and style, a gun’s weight will vary greatly. Handguns will weigh less than shotguns for obvious reasons.

On average, the weight of America’s most popular handguns comes out to 1.5 pounds when loaded and 1.1 pounds when unloaded, according to Caligunner.

This table below lists the loaded and unloaded weights of the most popular guns.

Just as weight comes down to a matter of choice and purpose when picking out a rifle, so is the case when selecting a handgun. A heavy gun will have benefits in recoil characteristics and accuracy, but it might not be ideal for you or even comfortable carrying around. Let alone for concealed carry.

Bear in mind that someone with a bigger frame and large hands will deem a gun less heavy and manage recoil better than someone with a smaller frame or small hands.

Hence, experts recommend picking a gun that anchors well on your hand, feels right when shooting, and can easily manage it.

Rifles and snipers are highly customizable and versatile. As a result, their overall weight is bound to change depending on the parts added or removed from the firearm. By this fact, they are also bound to have more weight than handguns and pistols.

Note that while a lightweight firearm may have a certain level of comfort and less physical exertion, it is likely to be less stable, accurate, and hard to control than a heavy firearm. This is also why most people deem rifles easier to shoot and more accurate than handguns and pistols, which happen to be less heavy.

That said, determining if your firearm should have more weight or less will come down to the purpose, performance, or capabilities you wish to get from the gun.

Brand and ergonomics might be influential; however, such shouldn’t take precedence over the firearm’s personal fit and performance.

The Bureau of Justice released some statistics that showed that over 1.4 million firearms were stolen between 2005-2010. Most of those guns were stolen from cars. That makes it essential to store...

Continue Reading
link to How Much Does a Typical Gun Cost? | With Examples

There are many different types of guns out there, depending on what you would like to use it for. This causes a wide range of costs when you go to purchase. Knowing which gun you would like to...