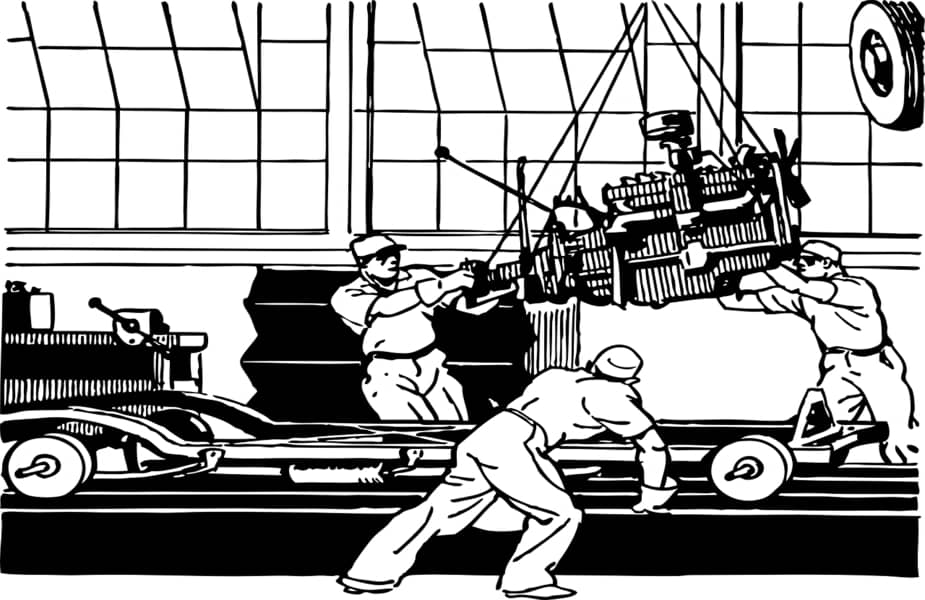 Cars are manufactured in automobile facilities and involve several inputs such as glass, metal, rubber, auto parts, machinery, and the required labor to put everything together. Without a doubt, a lot of effort, materials, and expenses go into manufacturing a single car. But just how much does it cost to make one?

While it is not possible to get an exact figure, the actual cost of manufacturing a car depends on the type of car, its features, price of raw materials and auto parts, research and development (R&D), and direct labor. These expenses fall into two categories – fixed costs and variable costs.

The rest of this article will discuss in detail the different types of expenses incurred during the car manufacturing process and the major cost components of manufacturing a car. If you’d also like to learn how auto manufacturers set car prices, read on.

What Is the Profit Margin for Car Manufacturers?

The gross profit margin of car manufacturers averages between 13% and 21%. Luxury car brands usually enjoy profits at the higher end of the scale while your typical budget brand makes much less per car. However, there are exceptions to the rule.

What Is the Cost of Manufacturing a Car?

Cars come in different shapes and sizes. Each has its specific features, so the cost of manufacturing each model is different. Car manufacturers won’t reveal how much is spent during their manufacturing process. However, the total cost would depend on two types of costs – fixed costs and variable costs.

When calculating the cost of building a car, you should also consider the cost of maintaining the facility, building and testing prototypes, finding suppliers, retraining workers, and adding new tools and tech.

These costs remain the same regardless of the number of cars being manufactured.

Unlike fixed costs, variable costs depend on the volume of cars produced. In car manufacturing, labor, raw material, and distribution costs can be classified as variable.

These expenses are directly incurred in the production of a car and change with the production output. For example, if an auto company wants to manufacture more cars, it will have to hire more labor, or if it wants to reduce its production volume, it will buy less raw materials.

Apart from the company’s production volume, variable costs can also change based on other factors. Consider the cost of raw materials as an example, in 2001, an increase in the price of oil increased the cost of pure raw materials such as steel, aluminum, rubber, and plastics by almost double.

Variable costs are the most important costs considered by auto companies when determining car prices. They are also the most relevant costs used when making economic decisions.

What Are the Major Cost Drivers of Manufacturing a Car?

The major cost components in the production of cars are research and development (R&D), raw materials, labor, and advertising. Raw materials account for about 47% of manufacturing, with steel determining almost 22% of the company’s operational cost.

The cost of the materials and components depends on the region where they are manufactured, the markets they are bought, and the volume of production.

Labor is the second biggest cost source for auto manufacturers. According to Statista, direct labor accounts for 21% of the total cost of making a car. Labor input also varies across car manufacturers, which translates to varying marginal costs.

Labor is typically paid on a per hour basis. In general, the time it takes to make a car is about 17 to 18 hours. This is the time it takes to assemble the parts and not the overall manufacturing process. Smaller cars can be assembled within 11 to 12 hours. Special cars such as a Rolls Royce can take several months to produce.

Research and development (R&D) is another major cost driver in car manufacturing. According to Statista, R&D takes up about 6% of the total production costs. Car manufacturers also have to consider administration costs, which takes up an additional 10%. Other costs, such as depreciation, logistics, and advertising, combine to a total of 16%.

Automakers consider a variety of factors when determining the value of a car, besides considering the cost of production. They conduct market analysis, consider similar models, purchasing interests and trends, and other factors.

It’s just basic economics. Car companies set a price such that it is not too high to discourage sales and not be too low to balance profit and operating costs.

Automobile companies manufacture different models every year. They produce new models to compete with their old models as well as with other brands. For example, if Ford reduces the price of one of its models, say a B-Max, there may be a negative shift in the demand curve for other Ford models as some would choose the B-Max over other products.

Larger and luxurious cars command higher prices due to their sizes and special features. As a model gets older, you’ll notice that its price begins to reduce. This reduction in price is a result of a drop in manufacturing costs with a reduction in the tooling and engineering costs. The price is then reduced to make the product more appealing and increase sales volume.

An increase in the production rate per period can also cause a reduction in the cost of production. This can mean purchasing bulk raw materials and components at discounted rates, using automated machinery, and more efficient use of labor. This reduction in production cost per unit can lead to a reduction in car prices per unit.

Manufacturing Costs of Some Popular Cars

Probably the most popular car brand in the world, Toyota leads as the best selling car with its Corolla model. The company can produce these cars at lower costs because of its high production volume. In 2015, the Corolla model sold up to 1.34 million units globally.

It is impossible to get exactly how much it costs to make a car; auto manufacturers don’t reveal that. But you can have an idea of the manufacturing costs if you consider the materials and components used to build the car, its features, and the labor hours involved. These costs vary depending on the type of car being manufactured.

link to White vs Yellow American Cheese | Is There a Difference?

The big question on everyone's mind is whether white and yellow American cheese is the same thing. Okay, I'm kidding, but it is something that I have often thought about when grilling up some...