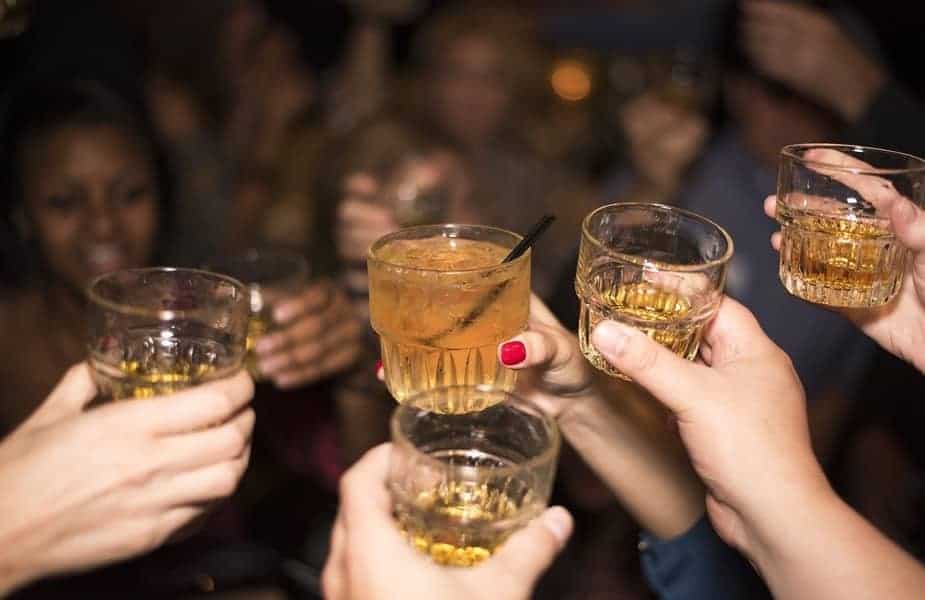 Sometimes you don’t want to feel the burn of pure alcohol buzzing down your throat. Having the right chaser can also make for an overall much better experience by adding pleasure to your palate in the form of a contrasting taste or texture. So, if you want an enhanced shot-taking experience, here are a few ideas to get you pointed in the right direction.

For the uninitiated, yes, ginger beer is different than ginger ale – although both beverages make for tasty chasers, and for those who are less snobby about their adult beverages, they can be used interchangeably. Ginger beer is essentially the OG ginger-flavored drink. It first came on the scene back in the 1800s when savvy European beverage makers mixed up a vat of ginger, sugar, lemon juice, water, and a specialty bacterial culture known as ‘ginger beer plant’ and allowed the mixture to ferment.

Most modern ginger beers these days aren’t fermented, so the ‘beer’ in the same might be a bit misleading, but the defining feature that sets ginger beers apart from ginger ale is its dryness. Ginger beer has a much more intense flavor profile. It packs a punch that it’s cousin, ginger-ale, rarely does.

Ginger beer tends to balance out the burn of the alcohol with its sweet and spicy bite. It’s fizzy finish leaves behind a pleasant tingle that will likely make you completely forget that you just tossed back a shot glass full of ethanol.

Ok, so this is a pretty broad category of potential chasers. And yes, we technically just discussed a soda when we talked about ginger beer, but we still think that soda deserves its own mention. Pop, as you mid-westerners like to call it, is not only an affordable chaser, but it allows for a great deal of diversity for your flavor combinations.

Dark liquors tend to pair really well with darker sodas like colas or ‘doctor’ style bubbly drinks. Clear spirits are complimented quite nicely by lemon-lime or fruit-flavored sodas. One of my personal favorite combo’s is Cheerwine – a popular cherry-flavored soft drink from North Carolina – and rum.

Soda and liquor tend to be a bit more on the heavy side, but the sweet syrupy flavor profile of carbonated soft drinks is one of the most tried-and-true booze chasers in the world. The benefit of chasing instead of mixing is that you don’t have to guzzle down several ounces of the sweet stuff to counter the harshness of the liquor. A little swig goes a long way.

Sure, this might be one of the more ‘trendy’ items on our list, but have you tried it? Pickle brine is exceptionally effective at neutralizing the burn after knocking back a shot. Granted, not everyone is going to go head-over-heels for a pickleback – as the combo has come to be known – but for those that dig it, pickle juice is the perfect savory accompaniment for many different kinds of liquor.

Sweet spirits like Rum and heavily smoky scotches should be avoided, but pickleback advocates recommend mixing the piquant liquid with vodka, gin, whiskey, and tequila. It’s the salt in the brine that neutralizes the stronger flavors associated with darker spirits like whiskey or bourbon, so if you’re going to try out pickle juice with your next shot, opt for a vinegar-free pickle formulation.

There are plenty of brine-based mixers that have hit the market after picklebacking became popular, so if you’re less inclined to use straight-up pickle juice, you can pick up a bottle at your local liquor store. Some pickleback enthusiasts recommend trying out other brine like olive or pepper juice. The world is your oyster….er, pickle.

I know, boring, right? Bear with me here.

Chasing your booze with water might possibly be one of the most healthy decisions you might make during a night of libations. As we all are fully aware – and likely have learned the hard way – alcoholic beverages can take a disastrously dehydrating toll on your body if you don’t counteract its effects with a tall glass of the clear stuff. If you don’t want a nasty hangover the morning after a night of celebration, then you’d benefit from supplementing your shots with some good old-fashioned H20.

Water is also an excellent choice for those that might be a bit more health-conscious than others. Booze already is calorie-heavy. Adding another sugary beverage on top of your liquor can add up before you realize it. Sure, water might not be as tasty as some of the other chasers on this list, but it is the most guilt-free and affordable option.

As an added bonus, water won’t stain your couch cushions when you’re inebriated buddy decides to show off their ‘sick dance moves’ on top of your coffee table. Accidents happen, and unlike sugary sodas or bright colored juices, water is a breeze to clean up when something goes awry.

Besides water, fruit juices are probably one of the oldest chasers that humankind has made use of. Not only have we been chasing our booze with fruit juice since antiquity, but it’s also one of the most aesthetically pleasant chasers around. To be fair, we could probably write an entire article about all of the various fruit juices and how they pair with each variety of spirit, but for the sake of brevity, we’ll just touch on some of our favorites.

Cranberry juice has this uncanny knack at pairing well with just about every variety of alcohol, although most people prefer to couple it with clear liquors. It’s slightly acerbic taste pierces through the harshness of booze and leaves its drinker with a rich, fruity aftertaste that completely masks the flavor of the shot.

Orange Juice is another popular option, not only because you probably already have a jug of it sitting in your fridge but also because of its remarkable ability to cleanse the pallet following a shot of virtually any kind of liquor.

Lemonade and Limeade also make for two of the finest chasers that you can find. Sure, the store-bought stuff works just fine, but nothing beats a home-made batch of lemonade on a warm summer’s day. Get fancy with it by adding a sprig of mint—your welcome.

Ever hear the old piece of sage advice that warns ‘beer before liquor, never been sicker. Liquor before beer, crystal clear’? Well, there really isn’t much scientific evidence that mixing spirits has any adverse effects on the body despite the fact that many people consider this rule to be gospel. Still, either way, if you aren’t opposed to washing down your liquor with another alcohol-containing beverage, beer is where it’s at.

Heavier beers like stouts and porters make for the perfect chaser for darker liquors, while lighter beers like pilsners, sours, and lagers pair quite nicely with clear liquors. For all of you out there that have hopped aboard the hard seltzer bandwagon – like myself – the light fizzy, bubbly, refreshingly boozy seltzers that have flooded the market all make for excellent chasers as well.

Chasing your liquor with another beverage with an ABV content might be ill-advised for those that tend to have trouble holding their liquor but for those that can stomach it, it’s a lot like the ultimate two-for-one deal. It’s kind of like experiencing the best of both worlds, but as always, please drink responsibly.

The Best Chaser For Whiskey

Many people like to chase their whiskey with something sweet like cola or even orange juice but if you’re looking for a stimulating flavor combination with an invigorating pick-me-up, try chasing whiskey, bourbon, or rye with Mountain Dew. Not only will the caffeine content give you a little lift, but the tangy citrus flavor will cut straight through the somewhat bitter flavor of the whiskey.

The Best Chaser For Vodka

Bring on the tropical vibes by pairing your vodka shot with a tangy gulp of pineapple juice. The canned stuff will do just fine, but for a genuinely sensational drinking experience, seek out the freshest pineapple juice you can find, preferably with no added sugar if possible. Mix pineapple juice with coconut water to make the perfect Pina Colada inspired chaser.

The Best Chaser For Gin

Not everyone is a fan of Gin’s bitter juniper berry flavor. On the other hand, some people swear by it. Regardless of what camp you’re in, one of the best ways to balance out its distinctive flavor is by chasing your shot of gin with citrus juice. Grapefruit juice is my go-to choice, but you might prefer orange juice or lemonade.

The Best Chaser for Rum

Rum has a distinct sweetness that is quite tasty on its own. Instead of chasing rum with an intense flavor that will completely overshadow it, consider using something lighter like a flavored seltzer to accentuate its unique flavor profile. Might we recommend black cherry seltzer to wash down that next shot of Malibu?

The Best Chaser for Tequila

In Mexico, they have this exceptionally tasty chaser called Sangrita. There are a million different recipes out there for this concoction, but most of the time, it’s composed of one part tomato juice, a dash of lime, a splash of OJ, salt, and hot pepper sauce.

Some variants also call for pomegranate juice, but regardless of your preparation, Sangrita brings out the best parts of the tequila and leaves the most wonderful taste in your mouth. It might sound unconventional to the inexperienced sipper but just think Bloody Mary mix without the horseradish and Tobasco.

I sure hope this list has helped you decide which chaser to throw down next time you are imbibing. Just writing this has me craving some Jack with a raspberry Mountain Due chaser. Yum yum.